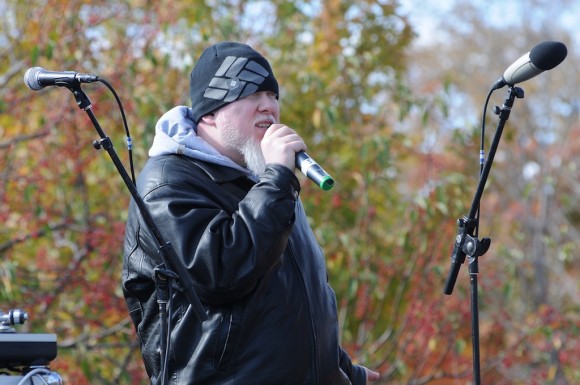 Brother Ali isn’t even trying to pretend to follow the rules anymore. First bringing his socio/political musings front and center on his amazing new LP Mourning in America and Dreaming in Color, then actually getting his hands dirty fighting for the things he was speaking with, and finally mixing up his live show in the last year with live musicians replacing a DJ, Ali has proven his vision lies much beyond just being a top-of-the-line MC.

After selling out his initial show, Ali added a second, all ages stop in his hometown on his worldwide Mourning in America tour. While the crowd seemed a little timid right out of the gate, Ali and his five piece band won over the crowd within minutes and delivered a stunning, 1.5+ hour set. Highlights spanned his discography, from the dancer aided title track to the stunning “Uncle Sam Goddamn” (prefaced with a “hope you like this, it got me into a lot of trouble”) to his storyteller roots on “Dorian,” Ali demanded, and received, the attention of the crowd, who ate up the energy Ali projected from the stage. Even Ali’s between song banter was focused and engaging, skipping any phony “ra-ra” crap and really connecting with the audience about community and the ability that all of us have to make change.

With one exception (“Only Life I Know,” which I thought really missed having the vocal sample high in the mix), the band really added another layer to the already great Brother Ali material. Even when he brought out guests (openers The Reminders and Homeboy Sandman, plus a surprise appearance by Slug), Ali proved without a doubt that he is one of the biggest (if not the biggest) star in our local music scene. I am not sure where Ali will head next, but I am confident that it will be genuine, forward thinking and fun as hell.