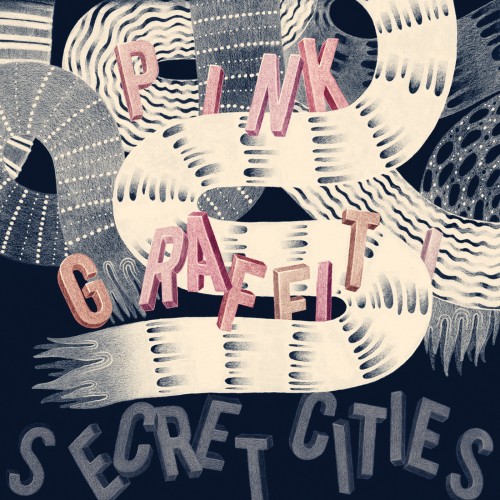 Secret Cities may be the first indie band to finally put North Dakota on the map.  The Dakotan experimental threepiece have seen a fair amount of buzz for their debut (under this name) record Pink Graffiti, a conceptual album about “Brian Wilson as a prism through which we view youthful things.”  The former Beach Boy only shows up once in name on the record, but his talent for fusing poppy harmonies with dense, experimental music is an influence that is felt throughout.  While Pink Graffiti is a mess of loops, fuzz, and wild instrumentation, it is also full of very carefully orchestrated pop melodies that hold the mess together.

From beginning to end Pink Graffiti is very difficult to pin down.  The record begins on an epic scale, with “Pink City”s pounding drums taking the forefront with heavily reverberated, high pitched vocals skating over top.   Underneath those two competing sounds the track is fleshed out with psychedelic sounding banjo plucking, tambourine and guitar, as well as a host of electronic distortions.  And from then on the sound ping pongs in every direction throughout the rest of the record.  “Boyfriends” implements a hummable penny whistle chorus to a slightly melancholy effect, while shortly after “Slacker” takes the sadness further with a heavy piano dirge that utilizes female vocals and violins.  “Aw Rats” starts out as a childlike nursery rhyme before diving headlong into a dark, proggy ramble that features vocals so fuzzed out that they are completely unintelligible.  And in yet another lefthand turn “Pink Graffiti Pt. 1” is a synthy dance jam that sounds like the band took a Cut Copy song and left it to twist and warp in the sun.

Although sonically the record is all over the place, Secret Cities’ have an evident talent for stringing mess and melody together into epic, climactic tunes.  Whether creating synth fusions, piano pop, or psychedelic rock, the melody always comes first; building throughout each track to cathartic crescendos.  The band’s talent is most apparent in “Color” which strings horns, xylophone, and vocals together in what would look like a disaster on paper, but generally works due to the fact that the song never strays too far from its bedrock melody.   Like many of Secret Cities’ songs the vocals are fuzzed out to an extreme level, but with such textured instrumentation the lyrical content generally isn’t missed.  More than anything Pink Graffiti shows a great deal of promise for a young band.  While the record itself is no masterpiece, Secret Cities show enough talent and willingness to push boundaries, that I wouldn’t be surprised if a genuine masterpiece is somewhere in their future.

Pink Graffiti will be out on July 20th on Western Vinyl

Groupon, a shopping website that offers a daily deal on the best local goods, services and cultural events in more than 150 cities around the world, launched in Rochester on July 7. site groupon san diego

“Groupon brings buyers and sellers together in a fun and collaborative way,” said Mason. “We offer the consumer a great deal they can’t get anywhere else and deliver the sales directly to the merchant.”