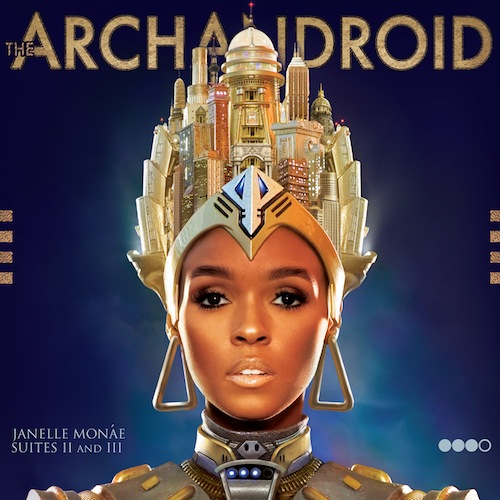 It can be difficult to gain a balanced perspective on an album after reading a single summary of the music. Bias can tilt a review, as can personal taste, history and just about everything else that is unique to the person writing it. So in an effort to offer an expanded perspective in such a medium, here are four reactions, four impressions, Four Takes on The ArchAndroid by Janelle Monae.

Janelle Monae participates in a powerful trend: women making weirdness sexy. Nicki Minaj, Monae, and yes, Lady Gaga—all move their heads like robots, wear [super]weird shit, and generally operate outside the couple of standard deviations we chalk off as ‘normal behavior.’ I like Monae’s aesthetic. Clips of her live performances blow me away. So it was a disappointment that her new disc didn’t move me. The album felt more like an impressive exercise—featuring the range of ways in which she could use her voice, a wide array production styles, and varied sound palates.  I suspect I’m in the minority in this position, and I hope so. I’d like to see Monae become even more successful, even if her latest work didn’t strike a chord with me. As her album garners its first reviews, I’ll be practicing the robot-head-thing in the bathroom mirror, trying to figure out how they do it in the major leagues.

Based off of my own identity and experiences, I am most attracted to art that pushes boundaries and/or is at least honest to the creator in the current climate, trend and environment of the world. As I listened to Janelle Monae’s latest album, I felt as though she was narrating scenes based around a Cinderella-like ballroom. Big band sounds with funky, hip hop dance numbers twisted with little psychedelic and symphonic turns weaved gracefully throughout the disc. To put it bluntly, I enjoyed this album. Every song told a story that introduced the next creating a nicely focused piece. Although a bit long, I felt ArchAndroid stayed fresh from track to track mainly due to Monae’s vocal abilities, themes, and instrumental choices.

It may seem counterintuitive, but the catchiest, most engaging pop music is usually the weirdest.  Think of “OK Computer,” “Mama’s Gun” or any of OutKast’s albums; “pop” might not be the first genre label that comes to mind for this music, but it’s hard to deny that these albums succeeded in the mainstream not despite their willingness to color outside the lines, but because of it.  And while it may be high praise, Janelle Monae is an artist in this mold.

The OutKast comparison is particularly apt—not just because Big Boi appears on the album and helped give Monae a foothold in the industry, but because both acts are able to combine an outer-space funk aesthetic, pure technical talent and wild ambition into final products that are undoubtedly impressive, but also approachable, catchy and fun.  “The ArchAndroid” is equal parts Dungeon Family funk, Disney movie soundtrack and… I don’t know… Prince-in-an-opera-about-robots?  It’s a beautiful train-wreck of styles and sounds, and Monae herself comes across not unlike her character in the concept album: engineered to be perfect, but with a fierce rebel streak.

“Tightrope” is easily the strongest single track, but the album as a whole—even the interludes—is breathtaking in both its overall quality and its ambition.  The pop music world has no shortage of good singers, good producers and good songwriters, but ambition and vision are very rare things.  And those qualities make “The ArchAndroid” the first “must-listen” album of the year.

In my humble opinion, Janelle Monáe’s The ArchAndroid is without a doubt the most fully realized musical masterpiece that we have seen this year, and possibly even this decade.  I have no reservations when I say that the young artist’s debut full length knocked me off my feet and I have yet to fully regain my balance.   The ArchAndroid isn’t just any old R&B album – it’s a concept project, a science fiction opera that incorporates funk, rap, soul, and psychedelic rock to paint the vivid and frightening world of post-apocalyptic Metropolis.   From the orchestral overture to the noirish styling of record closer “BabopbyeYa,” ArchAndroid delivers a never ending spin of creative flourishes, left hand turns (English folk? Classical music?) as well as a wealth of untamable pop hooks.  While standout tracks “Tightrope” and “Cold War” are (deservedly) being praised as the record’s first singles, I would venture that the bizarre psychedelic R&B of “Mushrooms and Roses” make it the record’s best track.   But really pretty much every song on this album could be a single in one of several different genres, which more than anything is a testament to the fact that this is as close to a perfect pop album that we have seen in a great while.  Our parents’ generation may have had Pet Sounds and What’s Going On, but with a monument like The ArchAndroid to claim as our own, I think that our generation is doing just fine.