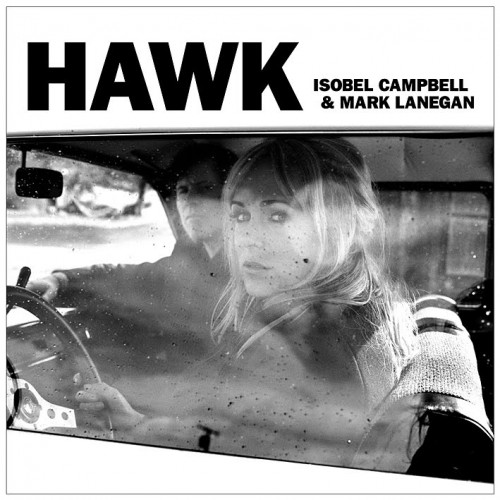 It can be difficult to gain a balanced perspective on an album after reading a single summary of the music. Bias can tilt a review, as can personal taste, history and just about everything else that is unique to the person writing it. So in an effort to offer an expanded perspective in such a medium, here are four reactions, four impressions, Four Takes on Hawk by Isobel Campbell & Mark Lanegan.

As a full disclaimer, I am a giant fan of Mark Lanegan’s solo work and have never really been swept up by any form or faction of Belle and Sebastian. This viewpoint helped color my impression of the first two Isobell Campbell + Mark Lanegan albums as good on the songs Lanegan was out front, OK on the duets and a little trite on the Campbell songs. This feel is still pervasive on their latest record Hawk. Highlights include the somber “We Die and See Beauty Reign,” the rustic “Snake Song,” the weirdly neo-soul “”Come Undone” and the Booker T and MG’s on acid of “Hawk.” Unfortunately, these tracks don’t make up for the schmaltzy “Time of the Season” and “Eyes of Green,” two dud duets and “Sunrise” and “To Hell and Back Again,” both sleepers with Campbell at the helm. In the end, this duo seems in it for the long haul, which is supremely disappointing to me, since Lanegan hasn’t released a solo album in forever (although he has killed it with Soulsavers) and these discs with Campbell are often underwhelming at best, downright disappointing at worst.

The third installment from Isobel Campbel and Mark Lanegan – Hawk – mixes and matches a number of different musical genres, from rockabilly to folk to blues to soul, yet somehow manages to feel closest to that most dreaded of genres – adult contemporary.  The majority of the tracks on this album would fit quite comfortably on a playlist between Nora Jones and the Goo Goo Dolls.  However, the album is not without its virtues.  The gruff, bucket-of-gravel vocals from Mark Lanegan are never better than when paired against Campbell’s cool whisper.  This quieter mode suits his timbre far better than his louder, shoutier stuff with The Screaming Trees or the Gutter Twins.  The defect here is not in the sound; it’s in the songwriting.  They play it too safe.  For all of their ability to genre hop and to mix tempos, nothing new emerges. And so Hawk makes for pleasant, if not particularly interesting, listening.

Isobel Campbell and Mark Lanegan: a combo that should work in theory but consistently fails to do so.  The Screaming Trees frontman and Belle and Sebastian vocalist/cellist return again with Hawk, seemingly dead set on making their partnership finally click. Rather than focusing on crafting better songs though the duo instead decided to instead make them more bizarre.  For instance some might find it strange that a Christmas song (“Time of the Season”) made it into the mix, or a new track set to the musical score of James Brown’s “It’s a Man’s, Man’s, Man’s World” (“Come Undone”).  And where they aren’t getting weird they are mostly just kind of boring.  Campbell consistently sounds like she is mailing in her vocal parts, which are more whispering than singing. While she sounds as if she’s attempting to mimic Chan Marshall’s smoky barroom croon, Campbell just doesn’t seem all that connected to (or interested in) her lyrics.  For instance in “To Hell and Back Again” she sings the lyrics “I been to hell / and back again” like she’s simply talking about a trip to the pharmacist.  Lanegan does better – his gruff, world-beaten baritone evokes hard luck blues like few others – too bad he just doesn’t seem to many interesting stories to relate in this case.  Sparingly accompanied Townes Van Zandt cover “No Place to Fall” is the exception though – a genuinely heart-rending confessional that features Campbell where her vocals work best, as a light, minimal highlight to the pitch black misery (in this case of guest vocalist Willy Porter).  As for the rest, it’s just ok.

When you have chemistry like Belle & Sebastian’s Isobel Campbell & The Screaming Trees’ Mark Lanegan, its rare to turn down the chance at opportunity.  Their previous two collaborations resulted in a quick connection that lambasted away softly at the detractors & naysayers who might have thought such a collaboration couldn’t work.  So therefore is a third time’s a charm at gnawing away the fat? Enter “Hawk”, which is the third in a series of collaborations from the recently formed duo.  It’s very bare-bones, think Iron & Wine with a little more added female backing and better engineering behind the boards, but still at its core, it’s haunting, daunting, and emotional.  You can hear it in the stark arrangement of acoustics in “We Die & See Beauty Reign,” or else in the dark, yet whimsical work of “Snake Song,” the disc’s highlight.  When you get to arrangements that travel a little into other areas, you can hear more adventurous work, such as the almost doo-wop sounds found in “Come Undone,” or the adventurous rockabilly stylings in “Get Behind Me,” which while it sounds a little outside their comfort zone, is still definitely a collaborative sounding piece of work.  Make no mistake in “Hawk” sounding precise, dark, and almost hollow, all without being cliche in the end.