Usually when a band moves as quickly into bigger and bigger rooms like Phoenix has done in the last year, I am slowly but surely turned off of the band.  300 people I can handle, but collecting 1,500 people in one place and offering them drinks generally leads to me being annoyed enough to cancel out any positive feelings from the evening.  For whatever reason, I don’t feel that way with Phoenix.  Yes, there were some annoying people at the State this Thursday for their sold out show, but it just seems right that the band is playing for bigger and bigger audiences.  Their last album, Wolfgang Amadeus Phoenix, literally screams to be pulled into the mainstream. 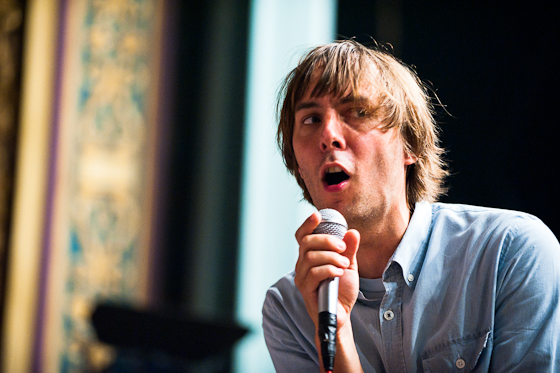 In addition to writing an album that sounded from the first spin like an album that was going to connect across many spectrum’s, Thomas Mars and crew are pretty good entertainers.  While it didn’t pack quite the visceral punch of their magnetic (and unbelievably hot) show at the Varsity last year, the band again proved to be very good at what they do.   Playing a very similar set as the last time I saw them (I missed the First Ave show that fell in between), the group leaned heavily on the sharp pop of their latest album and threw in a few songs from their excellent, but now overshadowed, back catalog.  Like usual, the group began with “Liztomania” (huge cheer) and ended with “1901” (really huge cheer) and played a charging 80 minute set.  Other highlights included a strong 1-2 punch of “Girlfriend” and “Fences” in the middle of the set and the entire encore, which consisted of the Air cover “Playground Love,” a French “classic” that I didn’t recognize, “Too Young,” a stirring “If I Ever Feel Better” and the aforementioned”1901.”  In moves I assume we equally for the crowd (who paid nearly $40 for tickets) and the band (who have been playing the same songs for coming on two years), the set was filled with lots of light shows and antics, including the group freezing in unison and generally hamming it up with the crowd.

While I definitely wish I could see Phoenix again in a venue as small as the Varsity (or smaller), it was only a matter of time before their great songs resonated with a bigger audience.  The groups infectious energy translated as well as any “rock” group can in a Theatre where people are stifled by seats, but the loud and adoring fans didn’t seem to mind being pinned down by a row and seat.  I don’t know what is next for Phoenix, but I wouldn’t be surprised if they continue to find bigger and bigger audiences in the Twin Cites.  Hopefully, for their sake and ours, the next time they come through it will be behind a new album with a new set list, as I am sure no matter how good it feels to be drowned in adoration, they are ready for some new songs too.

Openers Toro Y Moi played a short but spirited set that seemed to play well with the growing crowd.  I was a big fan of Chazwick Bundick’s debut record Causers of This, which dropped earlier this year and featured Brundick’s chilled out, bedroom pop stylings.  When I saw him at the Turf earlier this year he played a great set featuring just himself on guitar with some electronic equipment backing him up.  With his new single “Leave Everywhere” , he is taking a more highly produced, almost R & B path, something that was very evident live.  He played keys and sang, backed up by a bass player and drummer.  If I didn’t know coming into the show that it was Toro Y Moi opening, I would have never known it was them, they sounded that different.  It was cool to see him getting this chance to win over new fans, but I couldn’t help but thinking that I wished they could have heard him in his old incarnation.