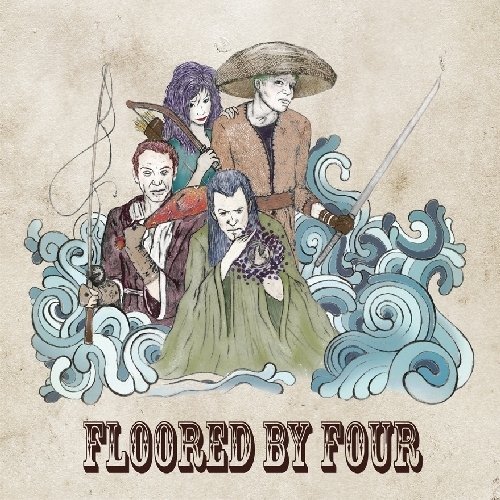 Mike Watt is a busy man. From his own solo work (a so far Japan only release), touring, playing bass for the Stooges and a few other projects, Watt seems to keep himself busy. In August of this year he put together Floored By Four with Nels Cline (Wilco) following their work on another side project, rounding out the project with Yuka Honda (Cibo Matto) and Dougie Bowne (Lounge Lizards). The band went right into the studio after their debut to put together this record.

2010 has been a year for improvisational rock supergroups (see Rangda) it seems and Floored By Four puts Mike Watt’s spin on things. The first track (all songs are untitled) kicks off into a dense funk, reminiscent of Miles Davis’ “On The Corner”. Cline’s wah-wah guitar trades off with keyboards with Watt and Bowne providing a solid backbeat. The second track falls into a little bit of a lazier groove, with Watt contributing vocals. The track drags a little bit at its almost 10 minute running time. The third track thankfully does not fall to the same issue, sounding very classic Watt along with Honda’s organ playing. The fourth and final track is a nearly 20 minute epic, a long and winding piece with a dark smokey jazz feel.

There’s no mistaking Mike Watt’s bass playing, he’s a master of the instrument. With Floored By Four, he’s definitely put together a great group that plays together well. There’s a lot that could be cut down here, but then again that’s not really the point of the genre. I look forward to hearing what these four can do together in the future.

‘Green Leaf’ on a roll

Jerusalem Post December 9, 2002 | DANIEL BEN-TAL and NINA GILBERT 00-00-0000 Headline: ‘Green Leaf’ on a roll Byline: DANIEL BEN-TAL and NINA GILBERT Edition; Daily Section: News Page: 03 Monday, December 9, 2002 — The mainstream pollsters aren’t saying it, but Boaz Wachtel of the Green Leaf Party (“Aleh Yarok”) believes that he will serve as a member of the next Knesset. web site legalization of cannabis

“I think we’re going to be the surprise of these elections,” he told The Jerusalem Post Sunday.

According to party treasurer Shai Hakim, a Green Leaf- commissioned Gal Hadash (formerly Gallop) poll predicts 2.5 percent of the electorate voting for the party on January 28, with another 4% still undecided. “We wonder whether Mina Tzemah even asks about Green Leaf,” he said.

Unscientific straw polls are meanwhile producing even more startling results – the party invariably registers at least 3% and received 8% in a poll conducted by a Kfar Saba local newspaper last week.

Aleh Yarok, which promotes drug legalization, came close to producing the shock of the last Knesset elections, mustering 34,029 votes representing just over 1% of the electorate – only 15,000 votes short of the 1.5% threshold for Knesset membership.

Dan Goldenblatt, an attorney originally from Canada, was considered a favorite for the No. 2 slot, and Renen Mosenson for third.

The party is to unveil its campaign on Tuesday at a Tel Aviv nightclub.

Party spokesman Dror Nissan said the party is confident of winning the “protest vote” and surpassing the electoral threshold. He said polls don’t reflect support for the party, as pollsters either ignore the party or potential voters are afraid to reveal their voting plans on the phone.

Party leaders admit that they have to contend with a ‘not serious’ image: One radio announcer quipped last week that arsonists had attacked the party’s headquarters – and that neighbors reported a pleasant feeling.

“We view ourselves foremost as a public health and civil rights party with three central platforms: civil rights and personal freedom, ecology, and the legalization of cannabis,” countered Wachtel. “A vote for us is far more than a protest vote.” “I think the party has matured,” said Hakim. “It’s been through the development stage, and now has its eyes firmly set on the Knesset. The atmosphere has become far more serious and focused.” The party’s headquarters, a sublet two-room office in Tel Aviv’s Rehov Brenner, was buzzing with activity yesterday.

Volunteers man three telephone lines throughout the day. “We can’t keep up. We need four more lines, but Bezeq is demanding a NIS 5,000 guarantee per line, probably because of their previous experience with political parties. We simply don’t have NIS 20,000.” The party’s total election budget is a trifling NIS 150,000, said Hakim. “That’s why you don’t see enormous billboards with our logo – we simply can’t afford such luxuries. website legalization of cannabis

“Our only income is from donations. We still haven’t raised the sum, so activists lent the party money from their own pockets. We are all volunteers.” n February, six party activists attended (at their own expense) a three-day seminar in Berlin hosted by the German Greens dealing with the logistics of running a political party.

“We learned how to conduct an effective elective campaign with minimal resources. They helped us a lot by pointing out their mistakes,” Hakim said.

Green Leaf’s election campaign will be based on its activists, he explained. “We have active branches from Eilat to Rosh Pina, including university campuses. The stickers and fliers are ready, and the first batch of rolled-up banners just arrived from the printers today. One guideline to our activities will be litter prevention – we’re an ecological movement and fully intend to remove all our garbage after the elections. See if the other parties do that!” Most of the volunteers are Israeli-born Jews with a background in some form of social activism, said Hakim. “Green Leaf remains an anti- establishment party. We want the people represented in the Knesset instead of rich corporations and religious pressure groups,” he said. The party intends to emphasize issues other than drug legalization.

“Whoever reads our manifesto – to our sorrow few voters ever do – is always impressed. It expresses a desire to change fundamental aspects of this country. Ecology is strongly emphasized – there is still time to undo historical mistakes. Funds must be allocated to the periphery, to counter the social gap. We call for separation of religion and state – 75% of the population believes in that – and propose a referendum to finalize borders of the country. It’s time to let the people choose, ” he said.