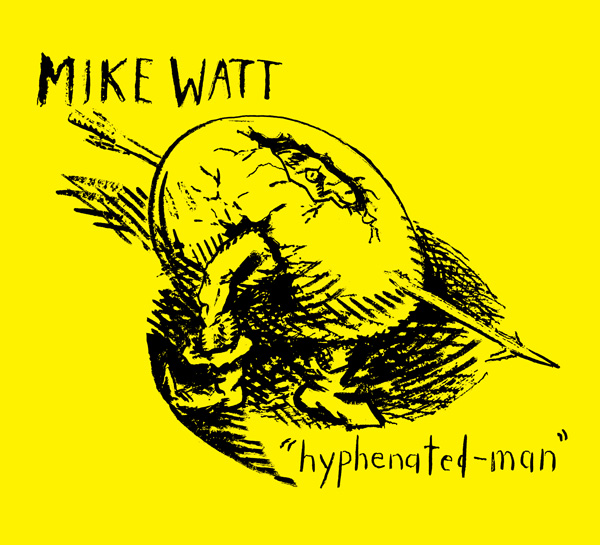 “Mangled-up parts together twisted / didn’t realize most existed / bafflin’ how they’re connected / can’t understand what’s existin” Mike Watt sings on the track “Confused-Parts-Man,” which is a pretty good summary of his latest album Hyphenated-Man. Described as his third rock opera (following 1997’s Contemplating The Engine Room and 2004’s The Secondman’s Middle-Stand), Hyphenated-Man differs in that it doesn’t follow any narrative. Instead, as Watt describes it, the album is more of a mirror that has been shattered into thirty pieces and then shoved back into his mind and turned into thirty different songs.

Most of the story behind the album, though, goes back to 2005 when Watt and Minutemen drummer George Hurley united to play some Minutemen songs as a duo to celebrate the release of the “We Jam Econo” documentary about the band. “I was digging on how ‘econo’ those tiny tunes were – no filler, right to point and distilled down to the bare nada,” said Watt in the press release for the album, which is a good reference for the new album. Watt and The Missingmen (guitarist Tom Watson and drummer Raul Morales) speed through 30 tracks in just a hair over 45 minutes, passing the 2-minute mark only twice. While it may not quite be the 43 tracks of the Minutemen’s seminal Double Nickels On The Dime, Hyphenated-Man is definitely Watt’s most Minutemen-sounding record in a long time. Short and to the point, tracks flow into each other quite well, and tracks pick up quickly where the last left off. “Arrow-Pierced-Egg-Man” kicks off the record in pretty classic fashion; Watt’s complex bass lines are met by Watson’s guitar, which flirts with almost jazz and funk sounds. “Bird-Is-The-Helmet-Man” is an early standout on the record and one of the most straightforward rock songs, while the next track, “Belly-Stabbed-Man,” is a frantic piece that’s the closest to matching D. Boon’s classic guitar style and the Minutemen sound. “Pinned-To-The-Table-Man” starts out with some poetry from Watt, “Be brave Watt / stop never reflectin’,” he says as part of the opening to what becomes a smokey jazz instrumental. Lyrically the record ties together in places, most notably with lots of lyrics about birds and mice.

Hyphenated-Man might not be the typical album to receive the rock opera tag (even if it is a self-proclaimed tag), a long string of fractured songs pieced back to back, but Watt makes it work. A great batch of songs that look back to his previous work in the Minutemen, Hyphenated-Man twists and weaves a beautiful tale which is precisely why we love Mike Watt.