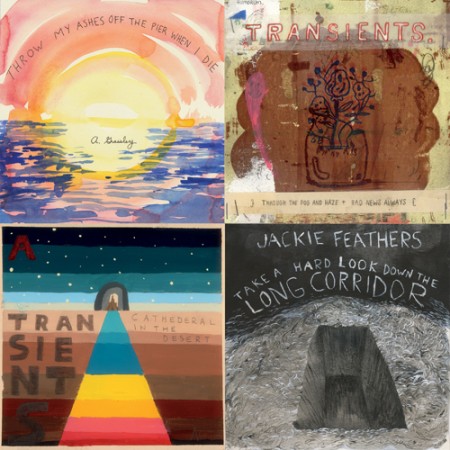 After suffering a near drowning recently off the coast of California, longtime San Francisco fixture Sonny Smith (Sonny and the Sunsets) has embarked on an ambitious array of new projects that include a play, a novel, and even comics.  Additionally, Parts of said novel, Adelard the Drowned, have been transmutated into four new songs, which Smith will be releasing as an EP on December 11th.  He was assisted in this feat by two members of San Fran throwback group The Sandwitches, as well as a group named as “The Transients” for which there is little public record.

And considering that Smith nearly drowned himself, it should be no surprise that the new material is drenched in issues of mortality, as well as briny aquatic imagery.   It’s also consistently more serious than Smith’s other recent work Tomorrow Is Alright, in which Smith balanced out his melancholy and playfulness in equal spoons.  The new EP displays none of that playfulness – while Smith’s laid back, beach side manner is the same, he speaks with the stoic sobriety of a man who wishes to impart something important.

And just what it is that is so important? Well, in opener “Throw My Ashes from this Pier When I Die” it’s simply love.  While Smith could have gotten considerably more morbid with the afterlife theme, he instead uses it to illustrate a picture of contentment: he’s never been so happy as he was sitting on the pier with his mate, so that’s where he wishes his ashes to be laid to rest.  The song is a relatively elegant affair, with Smith’s whisper being complemented by a couple of guitars as well as the Sandwitch gals’ understated vocal accompaniment.   “Take a Long Hard Look Down the Corridor,” takes the EP to a darker place with its allusion to staring death in the face and coming to terms with it.  The lyrics are more or less just a continued repetition of the chorus, but with the stripped down guitar chords and stepped up vocal harmonies, it still manages to affect a lovely sense of sadness.  Similarly “Through the Fog and the Haze,” describes a man whose pain and suffering leads him to contemplate simply walking into the ocean – all over soft, bluesy organ and excellent guitar chord progressions.  The EP’s one outlier is its last track “Cathedral in the Desert,” which sticks out both for its slightly upbeat tone as well as its lack of drowning-related metaphors.

A close brush with death will occasionally lead artists to take dramatic changes in their work – whether in finding ambitious ways to “make it more important” or god forbid, more religious.  Often times these efforts can lead to disaster.  In Sonny Smith’s case though, mortal awareness seems to be fertile ground for the artist’s craft.  The Sonny and the Sandwitches EP may only be a slim four songs, but as Smith’s recent flurry of activity can attest, it seems to only be the tip of the iceberg.

Pre-order Sonny and the Sandwitches here