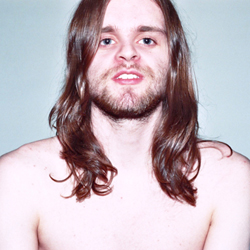 The snarling, angry set of wolf teeth that make up the inside picture on the vinyl should serve as a fair warning to anyone thinking about entering the twisted world of James St Murder Laden Mitten Wonder, the debut record from Minneapolis electronic artist Albert. The 10 song LP, put out recently by local label Totally Gross National Product, is a hypnotizing, murky mess of electronic dirges, synth soundscapes and spooky sound collages, the combination of which is a challenging, highly rewarding journey. While the album will be a little outside of the box for many, the layered mess of sounds will hit home for many and have created a confident and enveloping record that succeeds in creating a 4th dimension where the listener can lose themselves.

The A-Side, thee of snarly wolf teeth fame, is a jangled creation of convoluted beats and bait and switch mazes of sound. The songs, which seem to be forming, often disappear, replaced with twitching noises and distorted vocals. Left on in a dark empty house, the A-Side of James St. Murder… would lead most people to throw themselves out of a glass window to escape that torment. The B-Side picture is a much more welcoming set of teeth, possibly a fuzzy cat. These teeth, like the music on the side it covers, are much less imposing than the A-Side and find Albert stringing together ideas more fully and even developing songs and melodies to the point of making songs that could be considered electro-dance, albeit on the weirder end of the spectrum.

The whole record is dense and formidable and could easily be dismissed if not give the proper attention. The five songs on the A-Side are more provocative and discordant. While the B-Side material isn’t the Postal Service by any stretch, songs like “luke dragon’s weed k hi” and “which user is the best user on internet” are impressive in their own right and could attract listeners that would run for the hills listening to the more messy A-Side. The whole record is a boisterous and impressive, taking chances when needed and allowing for some material that is slightly easier to grasp to trickle through on the last half of the LP. The collection as a whole is impressive and is another feather in the cap of the great folks at the TGNP label.

Buy the record at the TGNP site HERE

ColoradoBiz January 1, 2002 | Bronikowski, Lynn Perhaps it was destiny. Tom Kientz earned a perfect score on the math section of his SAT college-entrance exam and today at age 35 is senior vice president of Compass Bank, heading up retail operations at 24 branches for the state’s youngest and fifth largest banking company.

The son of banker Ron Kientz, who retired three years ago as president of BankOne in Englewood, the younger Kientz never intended to pursue a banking career when he graduated with a degree in electrical engineering from the University of Colorado in 1989.

“The only jobs I could find in that field at the time were in Southern California, and I wanted to stay in Colorado,” said Kientz, a Colorado native who earned an MBA from the University of Colorado at Denver.

So his part-time college job as a teller for Central Banks turned into a full-time job as a loan officer. He never looked back — eventually helping to pilot 19 bank mergers and acquisitions during the industry’s 1990S merger mania.

His 16 years with U.S. Bank eventually took him to the Portland, Ore., area where as district manager he oversaw 51 branches. But Colorado always beckoned, and during a visit home he stumbled on a newspaper ad for Compass Bank. Kientz jumped at the chance to come home and sign on in June 2000 with one of the state’s most aggressive and fastest-growing banking companies. this web site compass bank online

“We’ve seen growth rates of 15 percent to 20 percent, and this year have seen core deposits grow just since March by 30 percent,” said Kientz during a pre-Christmas interview. “We would like to have 10 new branches in 2002. It’s a wonderful growth bank and is committed to growing, which is why I wanted to join them.” Kientz also liked the company’s fresh marketing approach — offering free ATM banking, for example, even if a customer uses ATMs not affiliated with Compass.

“We anticipated others matching it, and no one has,” said Kientz. “Now our biggest challenge is get our name out there even more. We’re a big bank with the feel of a small bank, and in some cases, we’re the best kept secret in town.” PERSONAL NOTE When the Montreal Expos or Vancouver Grizzlies are in town, Tom Kientz steps up for the Colorado Rockies or Denver Nuggets. here compass bank online

Kientz is a baritone in the Prestige Barbershop Quartet — one of only a handful of musical groups that have sung the national anthem for all four of Denver’s professional sports teams.

But the Expos? The Grizzlies?

“We’re one of the few musical groups that knows the Canadian national anthem so we get the call every time,” laughs Kientz, who with his wife, Danette, has three children.

The quartet plays many charitable, social and business events, but Kientz found that singing the national anthem for a Compass Bank employee celebration last October was more of a challenge than most of his gigs. “It’s easy going in front of 50,000 people at Coors Field,” said Kientz. “But going before 300 employees, now that’s something else.” Bronikowski, Lynn