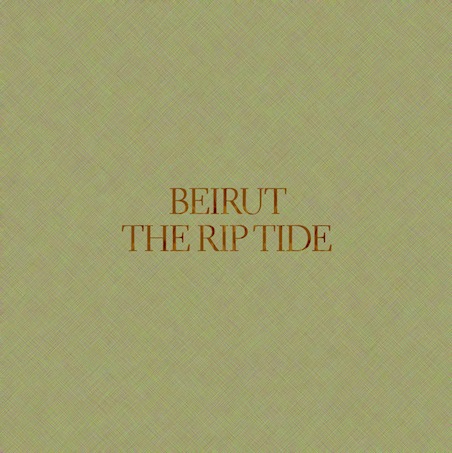 It can be difficult to gain a balanced perspective on an album after reading a single summary of the music. Bias can tilt a review, as can personal taste, history and just about everything else that is unique to the person writing it. So in an effort to offer an expanded perspective in such a medium, here are three reactions, three impressions, Three Takes on The Riptide by Beirut.

The story of Beirut’s music thus far has been one of shifting national identities. What began as a project inspired by Balkan folk music, culminating in their first LP, Gulag Orkestar, took on a chanson française flavor on their sophomore album, Flying Club Cup, and turned in a very different, norteño-inspired direction on their March of the Zapotec EP. However, on their latest album – their first LP in four years – they seem to give up their international influences and settled on a sound that can only be called “pop.” Nevertheless, The Riptide doesn’t feel like that big of a departure for them. All of the recognizable Beirut elements are here, from the florid (sometimes overly-florid) melodies, to the folk trumpet, to the anchor of it all, Zach Condon’s lush baritone. The Riptide offers nine lovely tracks, and for Beirut fans, it will be a welcome addition to the catalog.

I have been a pretty big Beirut fan for awhile now and though I continue to enjoy Zach Condon’s newer work, I keep finding that for the most part I am still going back to his first records, Gulag Orkestar and Flying Cup Club, to get my fix. And while I had high expectations for the forthcoming album The Rip Tide, I find that again I just don’t think it really holds a candle. I like the record, but am a little put off by some of the song’s more rock-centric beats rather than the romantic, funereal ballads that seem to be a stronger force in the older work. Take “Santa Fe” for instance that is dominated by a distractingly elementary drum beat. And “A Candle’s Fire,” which has a horn section so punctual and clinically orchestrated as to sound boring. I like Condon when he’s more ramshackle and elegantly frayed – Rip Tide seems, for the most part, much more precise and rock-driven. I still like a number of the songs: “East Harlem,” “Goshen” and “Paynes Bay,” particularly. Overall though, I don’t think this record will ever be one of my favorites.

Zach Condon recently talked about trying to create music that was a “epic melancholy,” which I somehow understand completely. Starting with the wide eyed Gulag Orkestar and through his last LP and EP, Zach Condon and the rest of Beirut have circled the wagons around a wide ranging sound of ukuleles, horns and pianos, with Condon’s older than his age baritone really bringing things together. On their latest (third) LP, the group sound grown up but as subdued as ever. The first track released from the album was the amazing “East Harlem,” and while the rest of the album doesn’t live up to the hype that the first track caused, it is still classic Condon. From the redemptive opener “A Candle’s Fire” to the strings and gallantry of “Payne’s Bay,” The Riptide is the groups most polished effort yet. While the refinement of sound will undoubtedly turn off some fans of the more ramshackle approach of their previous work, the songs on The Riptide fit nicely in the increasingly impressive Beirut cannon.