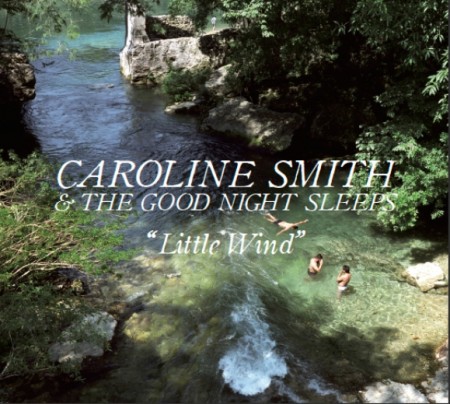 Caroline Smith and the Goodnight Sleeps new record is a bit like a nice cool glass of milk.  Its wholesome, sweet, and generally colorless.  Smith and Company originally rose to the top of the local music scene with pretty, infectiously youthful folk music and with Little Wind, they generally stick to that established formula.  And while that doesn’t show a tremendous amount of artistic growth, fans of the bands’ debut Backyard Tent Set should be more than satisfied with the ten new tracks.  To a song they are pretty easy on the ears, and Smith’s vocal talent is strong as ever.

Though the sound on Little Wind is on the poppy side, Smith utilizes somber inflection to give an overall tone of melancholy to her words.  She sings about issues of family, friends, lovers etc. – the usual suspects mainly, with tones of sweet solemnity.  And though Smith is far from  a bad lyricist, the emotional weight her words carry don’t always really get below the surface.  Songs like “Tank Top” and “Scholarships” deal with serious subject matter but the sound’s poppy veneer and Smith’s decidedly chaste thematic palette rob the tunes of their capacity to really stir the soul as much as they might.  Smith seems unwilling to allow any ugliness to creep into her tunes or lyrics, making her words seem more superficial than the place they likely spring from (I do not doubt that Smith is confronting issues worthy of song).

Lyrics aside, Smith’s songs seem to work best when she pares them down to the point where they largely rest on her vocals which are her strength.  Smith has an excellent voice and she largely carries Little Wind with her flawless high alto.  “Calliope” is an excellent example (which even utilizes some gritty guitar). As is familial ballad “Eagles Nest.”  Little Wind certainly doesn’t lack for talent (Smith’s backing band the Goodnight Sleeps are also more than capable).  Smith’s voice, the band’s instrumentation, even the lyrics all shine at points throughout the record.  They might have shined brighter had they taken a few more chances (conversely the opposite might have also occurred) but as it stands, Little Wind is a strong album much along the same lines as Caroline Smith’s previous efforts.