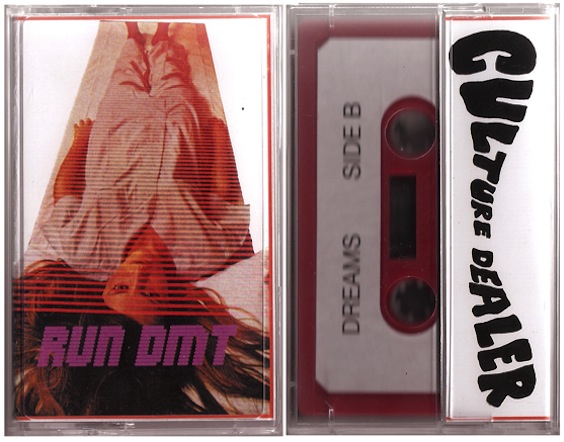 Run DMT made some minor waves with their cool Chocolate Bobka curated tape Bong Voyages/Get Ripped or Die Trying CS, which compiled two previously released tapes, but nothing that did justice to their tattered sound collage meets fractured pop sound deserved. The songs on that tape ranged from splintered electronic flourishes to basically sound found recordings. While they still have that DIY/Bedroom recording aesthetic, their latest release Dreams takes their sound even further and really shows a band who are stretching the boundaries of pop music.

The tracks on Dreams, like on their previous work, are split into two distinct but complementary types. There are the songs that fall closer to the ambient noise genre, with tracks like “Portal,” “Far Outro” and the hazy, bass driven “Romantic,” scratching that outsider/Avant-garde itch. The pinnacle of this approach are the mid album standouts “Cash for Gold” and “Montana Mountain Gold,” both of which are lush, rich instrumental tracks that really highlight the groups sonic experimentation.

The other end of the spectrum are Run DMT’s flirtation with pop music, which percolates to the forefront on quite a few tracks on Dreams. Songs like “Blondie Mothership,” Winn Dixie” and “Mineral Beings” are metallic pop euphoria, like the sounds of hammers hitting metal and the sparks coming out in colorful rainbows. The mechanics are cold and chilly, but the results, even with the robotic vocals of “Mineral Beings,” are blissful and exuberant. “Richard” sounds like Deerhunter and “Dreaming” starts sounding like the Knife before bursting into almost Beatles-esqe swirling pysch pop.

The breadth of styles on Dreams go to show the just how talented Run DMT are as a band and the steps the group have taken since Bong Voyage and Get Ripped or Die Trying. While the ambient stuff may be too “weird” for some and the pop tracks will be too easy for music nerds, the juxtaposition of the two really creates a strong overall LP. With the ability to really stretch their sound at times and reign it in to a more focused point at others, Run DMT have created a compelling and farsighted record with Dreams and have shown again to be a band who are doing really great things. Stream the whole LP below and buy the tape from the Culture Dealer website, a webstore put together by the band to release their own music and the music of their friends.