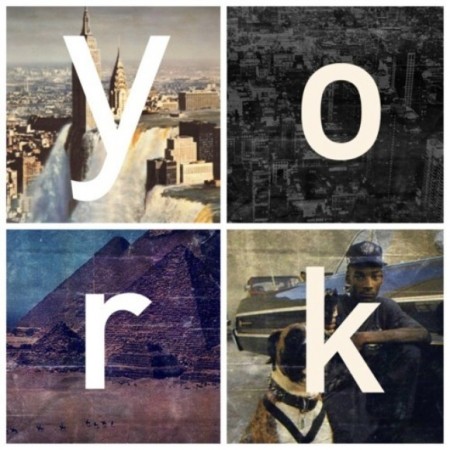 West Coast rapper Blu’s album No York has been floating around in the ether for a few months now.  While the album was supposedly going to be the artist’s big label (Warner) debut, its future now seems uncertain.  The record itself has been widely available for some time on the internet – likely due to Blu giving out copies to fans at his shows.  Warner’s indecision, however, is to rap music’s detriment, since they happen to be sitting on what could potentially be one of the year’s best hip hop albums.  Right now there isn’t anything in the mainstream or otherwise that sounds quite anything like it.

Whether No York’s eclecticism is to everyone’s taste though is a matter to be decided.  It will almost assuredly appeal to the underground.  The roughly chopped production work gives the record a sophisticatedly edgy grit, ranging from a sort of “Nintendo-in-a-blender” ADD electro spasms to grainy, nostalgic jazz sampling.  While Blu is a producer in addition to emcee, longtime collaborator Exile lends his talent to the likes of “Ta G’s” and Edan is featured on “Ronald Morgan” (both standouts).  Several other guests lend an integral, but not over-shadowing dimension to the sound as well.  Particularly the surprising choice of Wu Tang’s U-God in “Doing Nothing,” and Tiombe Lockhart’s turn in “Annie Hall.”

Blu’s rapping as well seems more inclined to those more appreciative of the abstract.  Though Blu has a laid back West Coast flow, his lyricism taps into strange and bizarre places.  It’s as if the perpetually bored-sounding rapper has grown tired of casual communication and raps in a kind of free-association.  It’s not that it doesn’t make sense – for instance the tune “Hours” Blu exhorts his own work ethic and denigrates other rappers (“we wouldn’t see eye to eye / if we were shoulder to shoulder”).  Still, as if to demonstrate his inaccessibility at the end of that track Blu casually asks a giggling woman what the song is about and she replies “I’m still trying to figure it out after fifteen times.”

“No York” the term itself Blue has stated is slang for a “West Coast state of mind.”  He peppers his verse with LA references like the Slauson Swap Meet that recall the golden age of “gangsta rap,” but his lyrical dexterity and willingness to experiment give No York a sound that is more about the future than the past.  In this era it’s difficult to associate particular sounds with each coast anyways, since as rap has grown well beyond the bounds of a few established zones.  Really, it’s best not to think about No York in terms of any rap scene, style, or past fad.  Blu has established his own unique sound and though it may have had its influencers (Dilla comes to mind) he has created something that is far from derivative. Whatever it is, No York remains unreleased, a diamond in the Warner vaults.  When the release comes (hopefully unchanged from its current format) then its bound to turn a lot of heads.

Stream the entire album below:

ASHA BLAKE, ABC News: That’s the news at 7:33, time now to head back out to Spencer and the Animal Kingdom and see what’s going on out there. Hi, Spencer.

DAISY FUENTES: Oh, you are on a roll this morning.

SPENCER CHRISTIAN: Well, thank you very much. I’m glad I got you to chuckle. How are you?

SPENCER CHRISTIAN: Right, got it.

SPENCER CHRISTIAN: We have some exotic creatures we’re going to take a look at here.

SPENCER CHRISTIAN: OK. We’re going to walk down here and meet Steve Martin, who’s a naturalist here at the Animal Kingdom. And he’s got some really exotic birds. Steve, why don’t you come over here? Can you get in the middle here, on the other side of Daisy?

SPENCER CHRISTIAN: OK. What do we have here?

STEVE MARTIN: This is a Eurasian eagle owl. He’s just a year old. And we have a real special treat, his younger brothers and sisters down here.

SPENCER CHRISTIAN: Wow. How old are they?

STEVE MARTIN: These little guys are 3 weeks old. Eurasian eagle owls are the largest of all the owls.

DAISY FUENTES: He’s looking at me.

SPENCER CHRISTIAN: He is, he’s looking right at you. That’s right. Now, how long before these little guys look like this one here?

STEVE MARTIN: You know, it’s only going to take about another two months before they’re this size. Birds grow very quickly. By the time they leave the nest, they’re full grown.

SPENCER CHRISTIAN: OK, now, Daisy, I’m going to give Steve the mike this time, because he has another guy to introduce us to down here…

SPENCER CHRISTIAN:… only to the people with the mikes.

SPENCER CHRISTIAN: So let’s move down — Let’s you and I get on the other side here.

STEVE MARTIN: Ah, right, there we go. Now, this is…

SPENCER CHRISTIAN: There you go.

STEVE MARTIN: There you go. But this guy can sing like you wouldn’ t believe.

SPENCER CHRISTIAN: And he’s a parrot?

SPENCER CHRISTIAN: Why don’t you get him singing while I do the weather? Can you do that?

STEVE MARTIN: That would be terrific.

SPENCER CHRISTIAN: OK, I’m going to do the weather…

STEVE MARTIN: Want to sing over the weather, Groucho?

SPENCER CHRISTIAN:… sunny and warm. And now let’s look at Groucho for just a second.

SPENCER CHRISTIAN: Is that awesome, or what?

SPENCER CHRISTIAN: Anyhow, that’s a look at your national weather…

GROUCHO: (singing) Put my money on the bob-tailed nag…

SPENCER CHRISTIAN:… and a look at Groucho…

GROUCHO: (singing) … somebody bet on the bay.

(Weather) (Commercial Break) Transcribed by Federal Document Clearing House, Inc. under license from American Broadcasting Companies, Inc. All rights reserved. No quotes from the materials contained herein may be used in any media without attribution to American Broadcasting Companies, Inc. This transcript may not be reproduced in whole or in part without prior written permission. For further information please contact ABC’s Office of the General Counsel.