Jerusalem And The Starbaskets: DOST Review 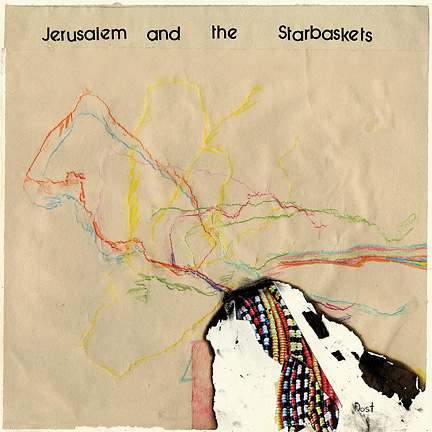 Compared to the rest, the first two tracks on Jerusalem and the Starbasket’s debut LP DOST (not counting the intro) sound like straightforward garage pop.   “Chocolate Covered Everyberry” and “Brighter the Light,” are pretty tightly constructed tunes, with the former’s climactic guitar fury balanced out with an evenly keeled beat, and the latter dabbling in post-punky synths.    After those first two song though its almost as if the Columbia, Missouri based duo discovered a bottle of whiskey and a stack of Townes Van Zandt records under the bed.  After the relative sobriety of its start, DOST quickly spirals into fast and loose punk inflected country (or perhaps the country inflected punk?).

The first of the record’s booze-soaked numbers is “Pretty Patty,” in which singer/guitarist Jeremy Freeze hollers the blues over thick, echoey slabs of guitar (there also seems to be an undercurrent of electronic noise though the production makes it incredibly difficult to make out).  Freeze follows with “First Cigarette in the Rain,” a tune that’s vocals have so much reverb it’s at times difficult to discern whether there are two people singing or if it’s just an echo effect.   Following that “Chinese Rifles” trims back the country influence a bit for a murky psychedelic foray that evolves halfway through into jammy pop rock chords.

Like the A-Side, DOST’s B-side begins with a dreamy guitar instrumentation that shows off the band’s dexterous picking.  Then its back to the whiskey again with “Fuck A Parade” laying down a rough and tumble rockabilly vibe, and “Sister Sorcerer” crafting dense psychedelic country.  “Similar Cog” finishes the record out on a high note by layering some nice, melodic guitar work into the distortion.   One can’t help but try to imagine how much better “Similar Cog” might have sounded (not to mention a number of DOST’s other tracks) if the production quality had been a little bit better.   Much of DOST sounds like it was quickly and cheaply recorded, and while it does lend the sound a certain DIY aesthetic, it also results in a lot of the record’s nuance getting lost in translation.   Still, even lacking better production the obvious quality of Jerusalem and the Starbasket’s tunes still shines through.