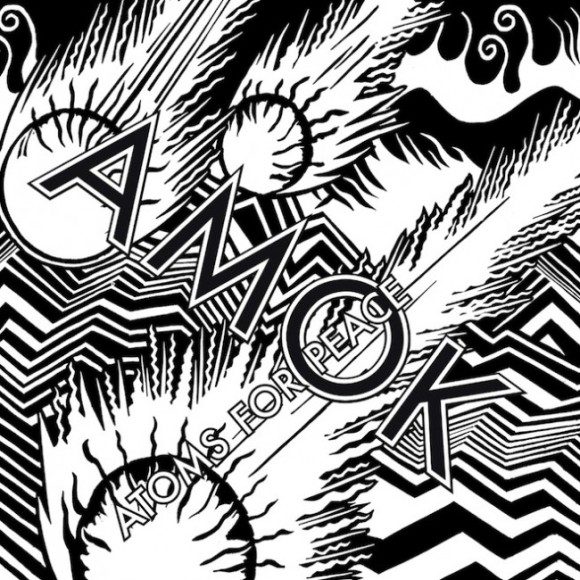 It can be difficult to gain a balanced perspective on an album after reading a single summary of the music. Bias can tilt a review, as can personal taste, history and just about everything else that is unique to the person writing it. So in an effort to offer an expanded perspective in such a medium, here are three reactions, three impressions, three takes on Amok by Atoms for Peace.

In interviews leading up to the release of AMOK, the debut album from Atoms for Peace, Radiohead frontman Thom Yorke’s supergroup, the singer claimed the group’s sound was exciting because you’re never “quite sure where the human starts and the machine ends.” Indeed. AMOK is a fascinating album; it clicks and whirs and swirls and buzzes
with this unique alchemic blend of electronica, downtempo rock, afrobeat, and more. I’m experiencing difficulty coming up with accurate descriptors of the songs and sounds on AMOK, because I haven’t heard many albums that sound like it. If anything, it’s a continuation of Yorke’s fascination with electronic music, his solo work, and Radiohead’s most recent effort, The King of Limbs. But where TKOL lacked intricacy and ambition, AMOK is a more complicated, but also more rewarding record.

I saw Atoms for Peace play in Chicago in April of 2010, when they formed to recreate the songs on Yorke’s solo album The Eraser. I loved every second of that show. Yorke’s once-cold songs came alive with the help of a live band. Flea’s work on the bass added rhythm and depth to the performance, and the work of Joey Waronker and Mauro Refosco
on percussion gave their live show some serious kick. What’s interesting is that, three years after their formation, these strengths of the band aren’t emphasized, but rather toned down on the group’s studio effort. Much of the music is the result of late night, Fela Kuti-influenced jams in the studio where the band would attempt to recreate electronic
compositions by Yorke and frequent collaborator Nigel Godrich. Then, in a confusingly meta creative process, Yorke and Godrich would take those results and blend and edit them again. The final result is what is now AMOK, the aforementioned complicated mixture of music produced by both man and machine. While I have no doubt that the songs on AMOK will really pop in a live setting, the record is a dense and textured one to unpack. It’s warm
and groovy at times (“Before Your Very Eyes…” and “Reverse Running”), yet robotic on other songs, like “Dropped.” The songs ebb and flow without obvious patterns. Yorke’scryptic crooning is often undecipherable, sinking into the music rather than standing apart from it. I don’t love every song on AMOK, but the finest moments on the album are
undeniably great, and keep me returning for more. With each listen, new sonic elements of AMOK are revealed. This is an album to get lost in.

Radiohead’s Thom Yorke has been flirting with making the music that sounds like what he listens to. The problem with that is his audience mainly want Radiohead songs with guitars and sad lyrics. It’s 2013 and several years past Radiohead’s last relevant record in 2007 with In Rainbows, which followed Yorke’s solo debut with Eraser. Eraser was Yorke’s electronic playground, his fun personal record, and with this record it’s Eraser growing up. Much more accessible and enjoyable. Yorke is a well known fan of electronic wonder boys in relative new school producers Burial, Flying Lotus & Four Tet. And it’s here where Yorke draws his inspiration. Atoms for Peace was originally cobbled together as Yorke’s live band, featuring producer Nigel Goodrich, Fla, Joey Waronker and Mauro Refosco. Word in advance says after a late night of Fela Kuti and the very best marijuana–boom– a band is born, sort of. It’s still Yorkes show but he gets nice contributions from Radiohead mates in Goodrich and their percussionist Refosco along with Flea and Waronker. Dubbing the live effort Atoms For Peace and quickly recording a record with band. Well almost recording as band, well at least Yorke’s band. Yorke’s has spent the past few years making music that seems to represent a free spirit and sense of exploration.

Opening with the lightweight glitch of ”Before Your Very Eyes” Yorke tweaks intro guitar lines before quickly giving away to an electronic flurry of stops and starts hinting at older drum n’ bass. The first single sets the pace of the direction with “Default” loaded with galloping rhythms and electronic patches throughout. The strongest statement maybe be the simplest of lyrics as Yorke reflects “The will is strong/But the flesh is weak”. Yorke hasn’t sounded so clear and delicate as his falsetto on the sensuous ”Ingenue” as he softly beckons over the coolest runaway music “And you know it/Fools rushing in/Yeah /Well you know it./Who let them in/Yeah/Well you know it/Gone with a touch of your hand/Gone with a touch of your hand”. One of the more ambitious tracks ”Dropped”, is anchored by awkward rhythms as Refosco seems at home with Afro-Beat as Yorke brings the band to a spell, as he cries himself into a trance with hollow chants of “I don’t want to stop”. Than the song awakens and springs fourth that magic moment. Despite some great breaks and stutter grooves “Unless” feels like the score from a chase scene.

Guitars appear quietly as “Stuck Together Pieces” begins to ramble along with the exception of Yorke not bothering to actually finish writing the song, instead he gives the wicked toss-off lines “We don’t get away/ You don’t get away/We don’t get away so easily”. With perhaps his band in mind “Judge, Jury And Executioner” feels like its off a later day Radiohead record as Yorke’s voice soars ”Don’t worry, baby/ It goes right through me/ I’m like the wind and my anger will disperse…I went for my usual walk/Tell it like is/ Tell it like it was /Judge and jury, executioner”. Among the highlights “Reverse Running” is built on muted piano lines, an easy thump and a sexy baselines as Yorke delicately pleads “Pressed up to the glass/ All the things that you shouldn’t ask/But you see through me/ It doesn’t mean anything/ a meaningless plaything/ Reverse running.  Closing with the serene beauty of post disco sexuality on “Amok”, a meditative flex successfully synthesizing his passions.

Yorke and company have a made a contender –Kid A it’s not– yet it’s still worthy without being weighty or taken too seriously which is a refreshing and satisfying as the rhythms and textures capture an overall sound design that is immaculate even with it’s faults, it expands and ignites whats great about Radiohead in the first place. Taking a risk.

81/100
Hearing “Before Your Very Eyes…”, the lead off song from Thom Yorke of Radiohead, Flea of Red Hot Chili Peppers, longtime producer Nigel Godrich, Joey Warkoner, and Mauro Refosco, sounds a bit odd and different.  But that’s not any stretch of the imagination, considering this side project had their coming out party playing as backup for Thom when he played another side Radiohead project front to back, which was “The Eraser”. Regardless this side project really expands on the palette of their rock and electronic sensibilities without being too out there, and the fact that “Amok” is a lean 44 minutes over 9 tracks allows all the members to be focused and experimental without allowing for wild solos or anything that would tarnish their already solid legacies.  Even the lead single “Judge, Jury and Executioner” is an enjoyable ditty.  But one thing that shines through this album is Flea’s musicianship.  He’s a hell of a bassist and knows when to pull back, and also has an innate sense of when to let it all hang out, which makes “Amok” to be all the more interesting.