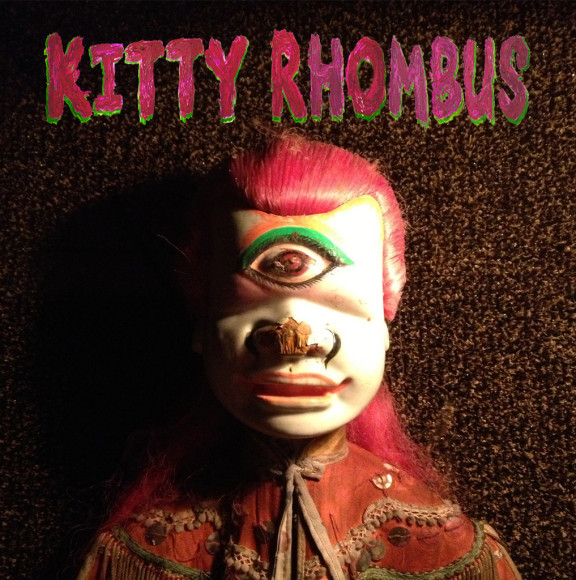 The new LP Spectre at the Feast from local quartet Kitty Rhombus is, in a musical sense, a bit like a frequent traveler’s passport.  It’s full of stamps from all over the map.  Visits to Metal, Punk, Psych Rock, Free Jazz, Minimalist, and more. Kitty Rhombus are very widely travelled.  And they have done an excellent job of distilling those influences into a record that is cohesively high quality, despite the disparate range of sounds.

The album begins with the twitchy funk of “4 O’Clock,” a kind of spastic ode to insomnia.  Ground gets covered quickly from then on – “The Lie” touches on psychedelic rock.  “Damage” brings out the screamo punk energy before “Gentle Shotgun” ups it a notch with the most unhinged track on the record – an anarchic fury of math rock, punk, and screams.  “Circles” dampens things down with a little minimalist experimentation before “Universal Error” and “Bite” closes it out with Math Rock and Metal fusions.  And this only names a handful of the genres that can be heard on Spectre.

Of course it’s not a race to see who can cram in the most influences, and variety does not quality make. What is special about Spectre at the Feast is that Kitty Rhombus have managed to combine just the right amount of technical ability with enough crazy to be interesting without becoming a mess.  These are guys that sound like they know what they are doing, but also don’t care if you think that they sound like they know what they are doing.  “Embrace the chaos” is their motto, but thankfully they have done so without fully abandoning musical convention.

Spectre at the Feast is well worth giving a listen to and you can do so for the first time this Saturday at the Hexagon Bar where the band will host their formal record release show.