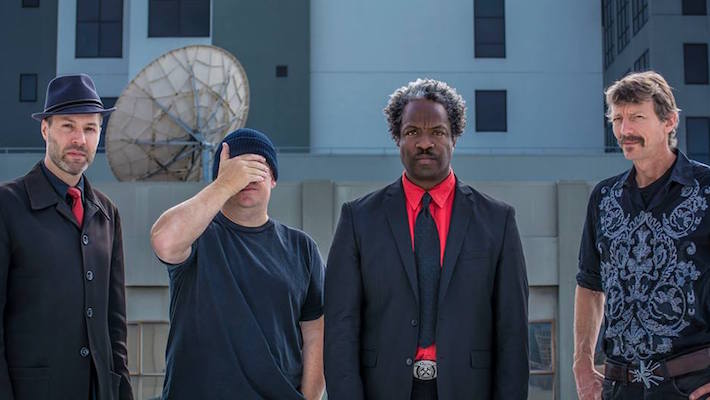 “I listen to music the way Ted Bundy killed people,” admits Eugene Robinson, renaissance man and vocalist for enduring Bay Area band OXBOW. Robinson is speaking specifically of his band’s seventh studio album, Thin Black Duke (Hydra Head, 2017). “If I could stop…I would.”
Its members often scattered throughout the United States, and sometimes the world, ‘immersive’ doesn’t quite describe OXBOW’s unique artistry. “We are obsessed,” Robinson continues, “and in many ways we have to be.”

I had the opportunity to speak with Robinson, guitarist/composer Niko Wenner, and bassist Dan Adams recently about their musical motivations, homebody projects, and most timely,Thin Black Duke (percussionist Greg Davis, unfortunately, could not sit in). Thanks to the wonders of modern technology, however, this conversation took place over three separate mediums:
Via Facetime on my cell-phone, I had Robinson; who was kind enough to take a break from his work day in San Francisco  – which for little ‘ol me was quite surreal (he was, like, right there).
Via Skype conversation, I had Wenner; also at work, but in Philadelphia – who was way nicer about my bumble than he had to be.
After saying goodbye to them, I finally had Adams at his home in California, via Skype phone – again, way nicer than I deserved; especially since his call was repeatedly dropped.
This virtual speed-bump actually proved to be indicative of the band, I felt. While they were separated by space, OXBOW were nevertheless very much earnest, affable, and loquacious. They have been themselves for a long time, and they knew their subject well.

For almost thirty years, OXBOW have been pushing and pulling the limits of cacophony, tenderness, violence, and grace to create what can best be described as music. Their sound could be delineated from anywhere, really: from the romantic lamentations of Nick Cave to the bellowing bile of the Melvins; from the mathematical miasma of John Zorn to the rudimentary rantings of G.G. Allin. Accessibility has never really been at the front of their minds, just honesty to themselves and to their music.
“The mistake most bands make in general is that the singer is kind of the guy who does funny things and sets people up to pay attention,” said Robinson. “I’m looking at my role as a singer in regards to jazz.”

In a world gone mad with artifice, OXBOW defy the notion of genre. From the metallic grind of Fuckfest (Hydra Head, 1989), to the piledriving assonance of An Evil Heat (Neurot, 2002), to the symphonic character studies of The Narcotic Story (Hydra Head, 2007), not many other groups have quite maintained the same level of arresting, consistent inconsistency. While most of their peers have mined topical subjects or committed their art to confession, OXBOW have remained focused on the world at large; or, more specifically, the people in it and their motivations.

“The topics we talk about are ultimately larger,” said Adams in our respective conversation, “topics that are applicable, broadly, to the human condition. All the music we have written has been ultimately the answer to that purpose.”

“We are creatures of our influence,” Robinson said, “and we’re all swimming in the same stew. We stay out of the news cycle”.

“The human condition is pretty broad subject matter,” Adams continued later. “The thing about this band, though, is we’re deadly serious about making music that we think needs to be made. We’ve been extremely consistent that way, as well. We’re getting better and better at keeping an open mind about what the future of our music needs to be instead of boxing things in. It’s a great adventure and a great opportunity to grow.” Thin Black Duke is definitely a testament to that adventure. After a successful touring of the OXBOW Orchestra throughout the 2010s, Wenner felt inspired to flex the band’s compositional muscles. The album features strings and woodwinds, as well as dynamic use of silence often absent from the band’s repertoire. At times, such as the driving “A Gentleman’s Gentleman”, the songs even flirt with verse-chorus-verse mentalities.

“Working with Bellflower was definitely an influence,” Wenner said of yet another musical feather in his cap, which includes members of God, Heliogabale, Jesu, and  Laika. “I really enjoyed the pop structures and wanted to bring them to Oxbow.”

Despite their sturdy onstage presence, OXBOW are first and foremost a studio project; and their dedication to their stories is both admirable and intimidating.

“We don’t make songs,” Wenner continued. “We write for recording”, calling their work “very much longform, cinematic, time-based art best enjoyed in private, hopefully in a dark room with your eyes closed”.

The lush, multilateral soundscape is inhabited by the familiar and the different, both timely and classical. Much like An Evil Heat, Thin Black Duke plays as a narrative piece led, of course, by the titular character. Never one to whistle a tune (with the opening track “Cold & Well-Lit Place” being a literal exception), Robinson brings the severest kinds of humanity to Thin Black Duke, accenting that soundscape with emotion and vigor.

“The music is informed by the lyrics somewhat I think,” Robinson later wrote via email. “Typically a record has a title and lyrics in advance of at least some of the music. So there are signposts. My job after this is to plumb some version of emotional truth. In other words meaning what I sing and singing what I mean. Everything after this is trying to mate and match the two in a way that’s harmonious to a certain extent. But I deliver a vocal that most does that. The rest is up to the producers.”

“It’s very much a group effort,” Wenner mentioned. “That’s why the credits are listed as music by ‘Wenner’, lyrics by ‘Robinson’, songs by ‘OXBOW'”.

Thin Black Duke pulses with vitality that could only be conjured from a collective, and in that collective mind lives a palpable safeguard psychology. There is a sense of wariness throughout, felt most during “Letter of Note”, “Other People”, and “The Finished Line” – paranoia that one’s integrity could easily be ployed by an outside party.

“It is not the artifact
It is the art

Leastways that is not why we pay it” – “Letter of Note”

When I asked him where this axiom came from Robinson plainly replied, “Spending an inordinate amount of time in sunny places for shady people”. The Duke, he went on to say, is “the force that knows no limit or limitation. Prometheus without the benefits of fire. Which is why the imagery is so often absent heat. Or light, even.”
Integrity is all a person has in the world sometimes; and if one feels that integrity jeopardized by any outside party they may, and often will, defend it fiercely. When the unstoppable force meets the immovable object things can get messy, sometimes to spectacular effect.

Which isn’t to say Thin Black Duke isn’t beautiful in its own right. Catharsis is just as reverent as it is menacing. Percussionist Greg Davis’s contribution is a direct example of such a notion. Like the pulse in one’s temple, Davis’s drums direct the listener’s mood throughout the song cycle. The ‘ups’ slam and pop, and the ‘lows’ duck and dive to great effect. And is that oboe I hear from time to time? Damn right.
OXBOW is one of the most human bands I’ve ever heard, capable of squeezing every emotion from their audience during their time at the pulpit of rock-and-roll and leaving their congregation exhausted and grateful when the needle finally clicks, rises off the platter, and finds its place at rest.

But you don’t have to take my word for it. OXBOW will be coming to Minneapolis Saturday, September 2nd, performing at the Skyway Theater at 711 Hennepin Avenue. Local concert-goers should be happy to hear that they’ll be welcoming one of their own, as Niko Wenner has called Minnesota second-home his whole life.

“My mother was from the North, an iron range gal born and raised in Hibbing, ten years older than Bob Dylan, [but] despite their shared time there they never met,” he explained by email. “My father’s family are from St. Cloud and Coldspring, Central Minnesotans…I feel less than whole if a year goes by without a visit to Minnesota.”

Although the Oxbow Orchestra Eternal will not be joining them, they have no proclivities about translating their latest album to a live setting.

“It’s a maybe counter-intuitive truth that compared to recordings live rock and roll sometimes doesn’t need as much to make the same point. Or sometimes the point is just different. Live, our songs don’t terribly miss the strings and brass from Thin Black Duke. One reason is that we constructed the songs to work both with and without the orchestra,” Wenner continued. “And in any case volume, turning everything up until it moves your guts around is damned compelling in it’s own right. Dan and I use enough amplification.”

Sounds to me that their tour-mates from Chicago, RLYR, and opening local stalwarts STNNNG just might get a run for their abrasive money. There are still plenty of tickets left, Twin Cities; so shame shame shame on you if you don’t find yourself at the Skyway September 2nd. Also, according to recent updates close to and within STNNNG, this will more than likely be their last performance; so shame shame shame (again) on those who find themselves absent. The Twin Cities will truly never be the same again with their disbandment. Come get your ass kicked (one last time), and enjoy every minute of it.

For a quick taste of the band’s latest, check out OXBOW’s videos for “Cold & Well-Lit Place” and “Other People” below, produced by Hydra Head Records and directed by Chris Purdie.