Dragon Turtle’s Almanac isn’t an instrumental record – but for all intents and purposes it might as well be.  When vocals do actually make a rare appearance they are generally incomprehensible and so completely wrapped up in the music’s diverse sonic textures that they don’t even sound like words.  Ostensibly the music seems to hail from folk, but takes the genre into a much louder, vivid, and more animalistic place.  Almanac is filled with sweeping waves of sound that are comprised of intricate arrangements of musical textures – heaps of guitar distortion, violent spasms of organ, white noise – that ebb and flow in a tide of impending doom.  It is pretty serious stuff. 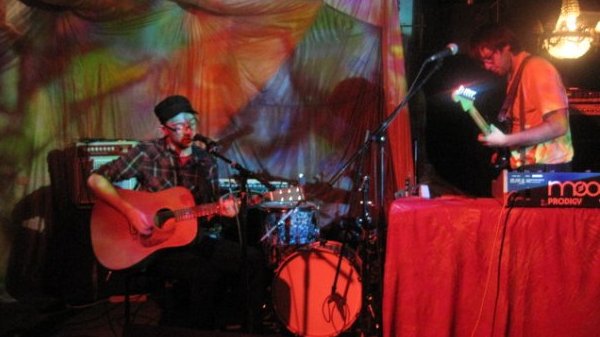 It isn’t so serious though to completely ignore basic aesthetics of sound – making for a more pleasurable listen than one might expect from a record that like it was designed to play as the soundtrack to the apocalypse.  Songwiting team Brian Lightbody and Tom Asselin have done a great job of balancing the experimental rabbit hole with melodic sensibilities.  “Moon Fallout” stands out particularly –a truly epic piece of songcraft clocking in at nearly ten minutes.  The song covers a great deal of ground in that expanse, but is anchored firmly by melancholy piano chords that keep the song on course while chaotic guitar distortion lurches every which way.  On the other hand, where a finely tuned balance of chaos and order makes Moon Fallout shine, when the songs slip towards either direction (such as too much chaos in “Organ Fallout,” and too little in “Hometime”) the result is less splendid.   Overall though the nine tracks that make up Almanac definitely find the right symmetry more often than they do not.