Free Energy: Stuck on Nothing Review 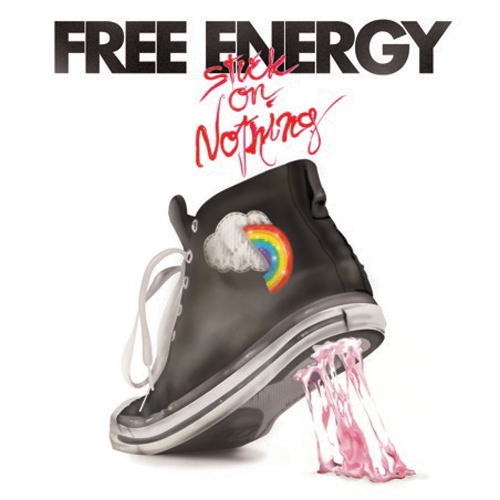 It is funny how one definition can mean so many things to so many different people. When someone tells me they like a record because it is “fun,” my snap instincts have me thinking the worse. To millions of people, the Black Eyed Peas are “fun,” while to me they are so horrible that I can barely bring myself to acknowledge their existence. So when I say that the new Free Energy album is really fun, I say it with slight trepidation and with reservations on how the semantics of this one word could lead people to think something very different about the album then I am hoping to convey.

You will know where you stand with Free Energy within the first 30 seconds of their debut record Stuck on Nothing. Starting with the previously released song “Free Energy”, the listener is assaulted with slashing power chords, cowbells beats and snarky, slacker lyrics. 3 of the 4 great songs from the bands initial EP (“Free Energy,” “Dream City” and “Dark Trance”) made the cut, although I am disappointed they didn’t include the last song from the EP, the excellent “Something in Common,” which is one of the best songs they have written. There are a few slower songs among the 10 tracks, including the stunning “All I Know” and album closer “Wild Wind,” but mostly the album is by-the-numbers glam rock meets post-punk riffs and exuberant, catchy as hell hooks. The highlight for me in dumb genius of “Bang Pop,” which isn’t going to change the world, but will sound great this summer driving fast with the windows down.

The band, who rose from the ashes of the underrated Minneapolis band Hockey Night, will surely find a big audience for their debut LP, if for nothing else than being produced by LCD Soundsystem frontman James Murphy. Luckily for the band, the people who come to the album based around the sure to come hype will find one of the most “fun” records of this new decade. To the bands credit (and to be clear as a reviewer), it is the “good” fun, not the Black Eye Pea’s kind.

The boathouse lends a rustic touch to the bass pond at the Biltmore Estate in Asheville, North Carolina.