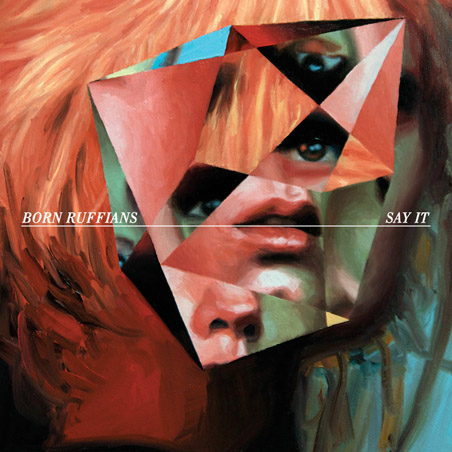 It can be difficult to gain a balanced perspective on an album after reading a single summary of the music. Bias can tilt a review, as can personal taste, history and just about everything else that is unique to the person writing it. So in an effort to offer an expanded perspective in such a medium, here are four reactions, four impressions, Four Takes on Say It by Born Ruffians.

Born Ruffians have released a record that, I think, previous fans could dig. “Say It,” the band’s second full length, provides a sort of surfy/ indie rock light listening experience, that while at times pleasant and catchy, doesn’t make a big impression overall. The record as a whole often feels forced and almost painfully self-aware, and despite singer Luke LaLonde’s impressive range, and occasionally pretty notes, his vocals are quite irritating.
There are definitely a few redeeming moments, like the R &B, poppy flashback song “What To Say.” This syth driven track seems like it came from a different Eco- system than the rest of the record, and would be perfect for a party dance mix.  It seems as though these dudes are trying (really hard) to do something that I just don’t get.

Listening to the Born Ruffians for the first time is an odd experience.  There is something mildly alluring in their aesthetic.  They get their sound from refusing to develop their songs past a certain point.  That means the album sounds like really well recorded demos of songs in progress.  The mood is very unoffensive and easy.   They’re ten unobtrusive songs that could be mistaken for being particularly artistic in their laziness.  But what seems pleasant at first becomes incredibly annoying as the same idea gets mercilessly rammed down your throat for 40 minutes by some very nice boys from Ontario in button down shirts.  So what was friendly and maddeningly acceptable for a few songs drove me to go on a desperate witch hunt for something to listen to with an edge before I could make it through the whole of Say It.  Legendary Houston rapper Bun B never sounded so right as he does following Born Ruffians.  Make no mistake, these guys are only interested in entertaining you to the extent that they can impress your parents at the same time.  They’re the sheltered twits on student council who are too nice and non-judgemental to dislike, whose most dangerous quality is liking R.E.M.  The album they’ve made is a violent scream that they should be working as presenters public radio instead of being a rock band.

I wasn’t afforded as much time as the others to seek out Say It’s merits, unfortunately, but after a few cursory listens I am not sure that those merits will be there even after listen number seventy seven.  What I mostly noticed was the sheer number of lyrical turds bobbing on the surface – “Retard Canard”s “I don’t want to start a flame in your heart / I just want to set the world on fire” immediately springs to mind, or “Sole Brother”s incredibly inane chorus.  Also “Higher and Higher” is the most egregious Talking Heads rip off I have heard in some time – and a stinker at that.  The record occasionally does some interesting things with West African influenced guitar patterns, but they aren’t well thought out enough to carry the sound.  At times they just sound like incredibly rough first drafts of Dirty Projectors songs, sung by the world’s whiniest lead singer.   So, um, yeah, I think I’ll pass on any more listens.

I kept hearing rumblings about the last Born Ruffians album, their debut record titled Red, Yellow & Blue, before finally giving it a chance.  Although wanting to like the album (I had heard references to Pixies and more boyant Wolf Parade), I found myself coasting through the album and never finding the songs sticking.  When I saw they had a new record, their sophomore album Say It, I wondered if the time between albums would have allowed for them to craft songs that were slightly more memorable.  They did.  Unfortunatly, they are memorable because they are so off kilter, and vaugly offensive, that I found myself wondering if they were serious.  Seeing a song titled “Retard Canard” set the tone fairly early and the band never even came close to digging their way out.  Although the band tried to experiment with their sound, the tracks sound hollow and lacking of purpose, never reaching any meaningful conclusion and leaving the listener wondering what the whole point was.