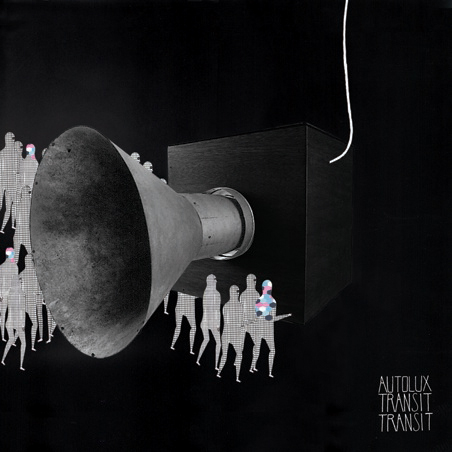 It can be difficult to gain a balanced perspective on an album after reading a single summary of the music. Bias can tilt a review, as can personal taste, history and just about everything else that is unique to the person writing it. So in an effort to offer an expanded perspective in such a medium, here are four reactions, four impressions, Four Takes on Transit Transit by Autolux.

I was hooked on Autolux only this past year when I stumbled across “Angry Candy” on a mix CD my friend gave to me as a gift. At that point, I was continually asking myself, “Why in the hell had I never heard this before?” This is a brooding and moody band; naturally, it’s gonna align with what I like in music. So I was pretty surprised to hear that their new effort is quite a bit more sedated than their debut. This was slightly off-putting at first, but then I found the album on repeat over and over again and came to notice that this is a sound which seems a particularly smart direction for them to advance into. By slowing down and calming down, they have altered themselves in a way that is still very listenable while pushing past the natural barriers they have garnered in the 6-year absence of any new material.

The standout track on the album for me is “Highchair,” a groovy bump of a tune with a guitar lick that makes your mood get in tow with the band. It doesn’t progress beyond Greg Edwards’ whisper for the entire 3 ½ minutes and it works well. Two songs later, we get “Spots” driven by a sparse piano and orchestral arrangement. Again, these songs lend themselves to a fleeting nature, one that mirrors their heavier material in a beautiful way. Whereas first album Future Perfect was a Summer sounding record, this is a Winter-effort in every capacity, somewhat of a sibling to Portishead’s shadowy Third if we’re making comparisons. It’s meant to simultaneously keep you in bed and tear apart your room in a bout of Minnesotan cabin fever.

This is a pretty darn good record which might get overshadowed by the plethora of incredible releases we’ve already had this year. The only reason it might get lost is that people don’t remember Autoluxas much anymore. 2004 to 2010 is a long break between albums which were mired with injuries and record label dysfunction. The wonderful and unique thing about this band though is the massive cult following they have acquired in that time. They will play the Varsity and the theatre will probably be close to selling out; when Autolux tours, people come out of the woodwork in flocks, and you forget this band has only released two albums in 10 years.

Its interesting to listen to Los Angeles trio Autolux’s sophomore album Transit Transit (finally after six years) shortly after hearing Menomena’s Mines on repeat for a few days.  Listening to Menomena has totally changed my perception of Autolux.  While the two bands definitely have their differences, they also both share some similarities in their brooding, electronic influenced pop.  On its own, Transit Transit appears to be a tidy piece of pop – a little on the mopey side but with a lot of cool pedal effects and precision drumming (thanks to bionic drummer Carla Azar) that makes for a good sulky listen.  When viewed through the lens of Mines though, Transit Transit pales in comparison to Brent Knopf’s more eclectic, risk-taking bombasticism. I feel like after all that studio time and all the talk of pushing boundaries, all Autolux has ended up with is a relatively safe pop sound.  Still, Transit Transit isn’t without merits.  Titular record opener “Transit Transit” is a lovely piece of moody piano pop with ethereally soaring vocal parts. “Spots” uses the same formula (adding strings), also with some success.   “Audience No. 2” is also one of Transit’s better cuts – shaking things up with a huge guitar and drums sound (which would have been nice to hear more of on the record).  With a few other exceptions though (“Kissproof,” “The Science of Imaginary Solutions”) much of the rest of Transit just seems a little limp and generic. A pretty good album by most bands’ standards but relatively disappointing considering the expectations.

Opening for Thom Yorke seems to have had a big impact on Los Angeles three-piece Autolux.  Their six-years-in-the-making sophomore effort Transit Transit borrows heavily from Yorke’s technique, especially with regard to rhythms and piano chord progressions.  In fact, the album can be fairly neatly bifurcated into the half that steals from Radiohead (“High Chair,” “Spots” “The Science of Imaginary Solutions”) and the half that steals from Sonic Youth (“Census,” “Supertoys,” “Audience #2”) although none of the tracks rise anywhere close to the level of those two groups.  In places, the references are so overt that it makes one wonder where the line is between influence and plagiarism.

However, this makes it sound worse than it is. Transit Transit has several enjoyable moments, and apart from the occasional cringe-inducing lyric (e.g.“this overrated atmosphere makes you kissproof”) there’s nothing offensive on the album.  Carla Azar adds some bright vocals on “The Bouncing Wall” and “The Science of Imaginary Solutions” which contrast nicely with whisper and drone of lead vocalist Eugene Goreshter.  Azar also elevates the whole affair with her furious drumming.  (She has to be in contention for the hardest-hitting female drummer in the business.)  Transit Transit is worth a listen, but was it worth waiting six years for?  Probably not.

I am new to the Autolux scene.  I apparently missed the boat when they dropped their debut album six years ago, but am now on board with their sophomore album Transit Transit.  Starting the album with the title track, the group mix in various forms of hazy, fuzzy, Radiohead-esqe rock over the 11 song, 42 minute album.  I can’t say the result is something that has completely blown me away, especially considering some of the hyperbole surrounding their first album in a gazillion years.  People made it seem like it was the follow up to In An Aeroplane Over the Sea, but it mostly is just a solid album that serves well as an ambient, slightly electronic pop record.  The band did grab my attention with album closer “The Science of Imaginary Solutions,” but this was after losing me to daydreams multiple times throughout the album.  Maybe that is what they were hoping for, a more electronic, pop infused post-rock album, but that isn’t the impression I got. No matter what their goal, Transit Transit comes across to me as a very ok album that I wouldn’t mind listening to, but I won’t be the one rushing to the record player to throw it on.