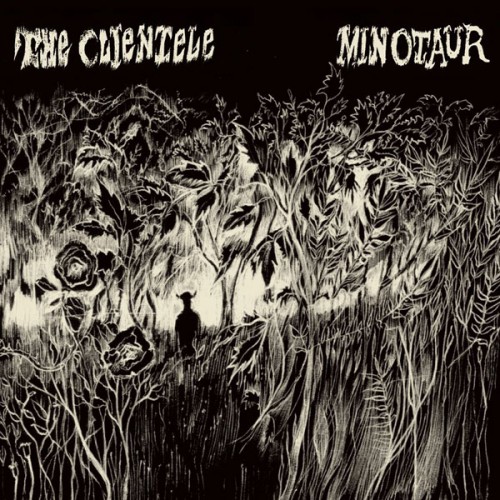 It can be difficult to gain a balanced perspective on an album after reading a single summary of the music. Bias can tilt a review, as can personal taste, history and just about everything else that is unique to the person writing it. So in an effort to offer an expanded perspective in such a medium, here are four reactions, four impressions, Four Takes on Minotaur by The Clientele.

While The Clientele have always been a band heavily indebted to the past, especially 1960s Brit-pop, at their best they’ve been able to transform those influences into something contemporary and vital, as on 2005’s Strange Geometry.  However, their latest “mini-album” (don’t call it an EP!) Minotaur is neither.  It instead feels like a series of bland genre experiments in psychedelic and bubblegum pop (excluding the five minute spoken-word interlude “The Green Man,” which is itself risible, but for entirely different reasons).  The absolute superfluity of this album is epitomized by “Paul Verlaine,” in which the tragic, fin de siècle, French minimalist poet is honored with a three minute pop song that sounds like a second-rate Herman’s Hermits cover.  The next time you’re feeling nostalgic for the good old days of the 1960s, skip this one, and reach instead for The Zombies or even – and why not? – Herman’s Hermits.

When Bonfires on the Heath came out last year many Clientele fans crossed their fingers for a return to the band’s Violet Hour/Strange Geometry days of gentle English psych-pop.  While many of them were in the end disappointed, the band’s new EP Minotaur may actually bring them back into the fold.  If anything, Minotaur sounds quite a bit like and extension of the group’s pop-sensible Strange Geometry days – with its breathy melodies, dark surrealism, and atmosphere-drenched pop.  But in the end, unless you are paying really close attention the differences between the Clientele’s records are generally negligible, at best.  To most people this is undoubtedly the Clientele, sounding as they ever did and always will, with maybe slightly more accessible hooks than we have heard recently.

Still, the titular track and follower “Jerry” are two of the best Clientele efforts that I have heard in some time, better than anything on Bonfires.    And the spoken word piece “The Green Man,” probably would seem trite in written format, but spoken by Alasdair MacLean alongside a spooky array of industrial clickety-clack it is downright terrifying.  MacLeanhas always warned us about the degeneration of the bucolic countryside, but “Green Man” brings a whole new level of vivid melancholy that is downright affecting.   My only real beef is that EP closer “Nothing Here is What it Seems” seems an ill-fitting follow-up to that piece – yanking the listener back out of his despair just as he has gotten comfortable.

I’ve always had a bystander attitude towards The Clientele. I’ve never fully committed myself to their albums to call myself a big fan. That being said, I would never give up the opportunity to see them live or act like I don’t respect what they do. I think the problem may be that they are a tad bit too twee for my liking. There’s just not going enough aggression to feed my punk tendencies and they just aren’t zany enough to feed my urge for throwback, psychedelic pop – something that I think they are going for. I mean, shit, if I wanted to hear some sappy, Brit-pop as depressingly blissful as this I would dust of my copy of The Queen is Deadand smoke some cigarettes. I did enjoy the dreamy feel of “As the World Rises and Falls” and “The Minotaur” was a fine enough introduction to the ‘mini-album.’ But they completely lost me with the off-beat, spoken-word track “The Green Man.” There was something eerie, creepy and very Pulp-esque about the song, but it just seemed very out of place – especially when it is the longest track on an album that only holds about 20 minutes of actual music. That, and Alasdair doesn’t exactly have the scariest voice on the planet. I think this short album would please both casual and diehard fans of The Clientele – or at least hold them over until their next proper full-length. It’s a fine enough listen to be told, but with so much great music this year/fall, I’ll let this one slip through the cracks for the most part. But let me end the review by setting in stone the fact that I thought The Clientele had the best cover on A.V. Club’s “25 Bands and 25 Covers” special with their version of M.I.A.’s mega hit “Paper Planes.” So they do have that going for them.