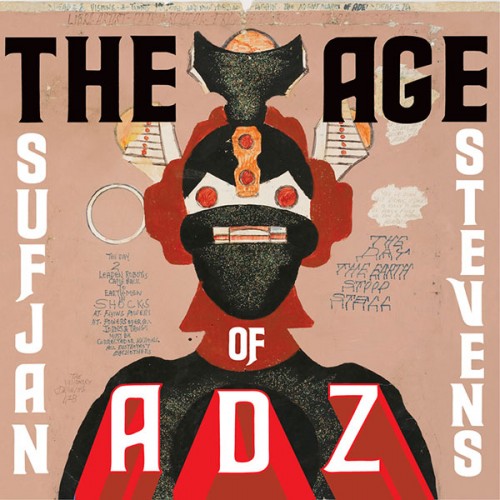 It can be difficult to gain a balanced perspective on an album after reading a single summary of the music. Bias can tilt a review, as can personal taste, history and just about everything else that is unique to the person writing it. So in an effort to offer an expanded perspective in such a medium, here are four reactions, four impressions, Four Takes on the new live album The Age of Adz by Sufjan Stevens.

The past could prove to be a tricky little bastard when longtime fans of Sufjan Stevens begin the wrap their heads around the singer’s sixth proper album, The Age of Adz.But it’s not because this is a whole new Sufjan – because, indeed, this is the same man that brought us so beautifully to Illinoise and back. It’s just that The Age of Adz, sonically, is just a completely different beast that listeners are used to Sufjan taming. It is, as you may have guessed, just as grandiose and equally filled with richly orchestrated arrangements as its predecessor – but Adz adds to what the singer was teasing at with his most recent release All Delighted People: the man knows and is exuberantly comfortable in laying his brand of folk onto electronically-laden soundscapes. And he does it so, so well. People have recently said that this shift somehow shows Sufjan taking a page from Radiohead in opting for electronics after their breakout album. But that cop out only degrades this soon-to-be masterpiece in Sufjan’s catalog. Adz is as big and bright and filled with wonder as Illinoise. And if this is the reason we had to wait 5 years to hear anything new then more power to you, Sufjan.

The Age of Adzshould be everything any Sufjan fan would have hoped it would be. People might pine at the fact that Sufjan has jumped on the proverbial post-Merriweather Post Pavilion wagon – but those people would be missing the point. Mostly for the fact that on his 2001 album Enjoy Your Rabbit, Sufjan proved that he previously had electronic chops to pull off Adz without the help of others. I could write a full essay decoding and breaking down specific songs, so instead I’ll try and sum it up quick with some of my favorites and highlights: Opener, “Futile Devices,” starts the album with a gloomy Simon and Garfunkel-type croon. The one-two punch of “Too Much” and into the tail end of “Age of Adz” shows the new/old Sufjan in full-orchestrated force. While the slow-moving, bass-heavy “Get Right Get Real” kicks and crawls through as many time changes as it does instruments. At a lengthy 25 minutes, “Impossible Soul” plays out like an epic, tragic opus – and, surprisingly, it’s not difficult to get through the entire song on repeated listens. After listening to the album numerous times on speakers I began asking myself is this was meant to be a headphones record.

I don’t think I could put any other album on par with Adz as the year and decade come to a close. And although it’s yet to be seen if Adz will become a more poignant musical statement than the monstrous Illinoise, there are times on the album when Sufjan himself is assured that Adz is bound for glory: Halfway through the dizzying “I Want to Be Well” the singer repeatedly proclaims, “I’m not fucking around.” Yeah, Sufjan, we know and don’t worry, we’re listening.

Sufjan Stevens is nothing if he isn’t adventurous. After building critical (and mild commercial) success as a gentle folky, he now is branching out with music that pumps energy into his usual somber, pretty tracks. While his new album, Age of Adz,starts out with the classic “Sufjan” sounding track “Futile Devices,” the rest of the album will sound foreign to fans who haven’t kept tabs on Stevens since Illinoise. I was lucky enough to get into his show at the 400 bar last year that sold out in minutes, so I saw a little of his prog influenced, multi part songs, but it is still jarring to hear on a full length record. From the twitchy, bubbling electronics of “Too Much” to the spaceship pop of “I Walked” to the epic album closer “Impossible Soul,” Stevens seems invigorated by the new tools at his disposal. While I am sure this album is not going to sit well with fans of “Jacksonville” or “Seven Swans,” it seems to me like a cool step for an artist that refuses to be pinned down. If you can get past the wild electronics and widely long songs, you will find an album just as engrossing and mesmerizing as anything Stevens has done in the past.

If there’s one thing you can say about Sufjan, it’s that to keep us waiting 5 years with the jewels in his creative arsenal seemed to asked a lot of us.  2010 is the year he’s being spontaneous and surprising; after dropping the unexpected yet pleasant All Delighted People EP, he returns with his first full length player, The Age of Adz.  Adz still sticks to its alt-folk roots, while straying away from it with more electronic instrumentation, you can hear it in the dizzying spins of the title track, however, there are spurts of moments when the instrumentation gets a little more personal, such as the chorus howls on “Now That I’m Older,” while punched-up kicks and menacing flutes invade “Get Real, Get Right” which is one of the many highlights.  However it all comes to a head with the ambient and soft-spoken “Vesuvius”, while “I Want To Be Well” is almost like a packed metropolis, floating by with instruments and vocals abound.  Make no mistake about it, Sufjan and his creativity haven’t lost a step, and The Age of Adz proves it.  Maybe its a tad lengthy at 74 minutes, but can you blame the guy? It has been awhile.

Paradigm shift! Folk/pop troubadour Sufjan Stevens has gotten all electric on us. Anyone who became concerned after hearing “I Walked” on Stevens’ recent EP All Delighted People can break out the full on panic: that tune was a signifier of things to come (and appears again here). On Stevens’ new record The Age of Adz, Sufjan and his Soul Sonic Force has definitely found a new muse in the synthesizer.

And my feeling is that the fan response to the new sound will be judged, not on how well Stevens adapts the new method, but rather on whether or not people are comfortable with hearing something new from a trusted old friend. For my part, based on only a few listens so far, I think Steven does a terrific job of co-opting his newfound sound by keeping strong elements of his old self around – the grand orchestral sweep, the whispery lyrical intimacy, as well as the occasional flute and horn. It will doubtlessly take awhile to let everything sink in to form a solid opinion but thus far I think Age of Adz is mostly a winner. I particularly love the angelic choruses that punctuate several tracks and add warmth to what may have otherwise become an electronic coldness. What I am not so sure about is the singer’s cluttered stab at funkiness, “Too Much,” his weird self-referencing in “Vesusvius,” and the occasional preachiness (am I wrong or is he singing “get real, get right with the lord” on “Get Real, Get Right”?). Many of the songs are also on the long side but it generally doesn’t bother me, except in “I Want to Be Well,” which gives epic scope to a song that just isn’t particularly good.

Still, this is just a first impression so I look forward to delving in for many more listens. Stevens definitely has me intrigued, and I wouldn’t be surprised if the more time I spend with Age of Adz, the more I will like it.

Age of Adz is out Nov 9th on Asthmatic Kitty.  Sufjan will be in Minneapolis on Oct 16th at the Orpheum Theater.

The six-year deal covers the stadium facility that is home to both the NFL Oakland Raiders and the MLB Oakland Athletics. Overstock.com Coliseum is one of only two U.S. stadiums hosting two major league teams. To learn more go to www.overstock.com/oakland.

“Overstock.com is thrilled to become a part of Oakland and Alameda County, and to be associated with the Raiders and the A’s–two globally-recognized championship teams,” said Overstock.com Chairman and CEO Patrick Byrne. “The Overstock.com brand is a great fit with these teams and with the excitement and culture of the area. We look forward to enjoying events with the community and doing our part to give back. Residents of the Bay Area can look forward to many great events taking place in the Overstock.com Coliseum.” “The Authority is excited to have Overstock.com as a naming rights partner for the Coliseum,” said Authority Chair and Oakland City council member Ignacio De La Fuente. “The additional revenue and prestige this agreement brings the City and County are important to the viability of the Coliseum Complex.” “The Authority has been working for some time to find the appropriate naming rights partner for the Coliseum,” said Scott Haggerty, Vice-Chair of the Authority and Alameda County Supervisor. “We believe Overstock.com is that partner and we look forward to a mutually beneficial relationship.” As part of the new alliance Overstock.com receives branding opportunities through stadium signage, internet, television, radio and print promotion.Overstock.com Coliseum plays host to more than 100 events annually, including 10 Raiders games, 81 A’s games, MLS and international soccer matches, concerts and corporate events. The Oakland-Alameda County Coliseum Authority manages the Overstock.com Coliseum and Oracle Arena and is comprised of representatives from the City of Oakland, Alameda County and SMG, a facilities management company. overstockcouponcodenow.org overstock coupon code in our site overstock coupon code

Founded in 1999, Overstock.com employs more than 1500 people. The company’s annual revenue has grown from $1.8 million in 1999 to $1.1 billion in 2010. For the past five years, Overstock.com ranked among the top five retailers in the U.S. for customer service, according to rankings published in the 2011 NRF Foundation/American Express Customer Service Survey, and recently Forbes reported that Overstock ranked first in employee satisfaction among all U.S. retailers and ninth among the best U.S. corporations to work for.

Premier Partnerships, a nationally-recognized leader in sports and entertainment sales and marketing, was contracted to secure a naming rights partner and brought Overstock.com together with the Oakland-Alameda County Coliseum Authority, the NFL Oakland Raiders, MLB Oakland A’s, the city of Oakland and Alameda County.

“Putting this deal together was a smooth process because all the parties understood the value proposition of creating this globally-recognized naming rights partnership. Through our Naming Rights analytical tool, the Revenue Maximizer™, Premier matched the Coliseum’s assets with a brand whose business will grow from the exposure of the Coliseum and the teams who call it home,” said Jeff Marks, Premier Partnerships Managing Director, who co-led the deal with Jesse Ryback. “Ryback first identified Overstock.com, with its international standing and innovative approach, as a perfect fit. Everybody is a winner here.”