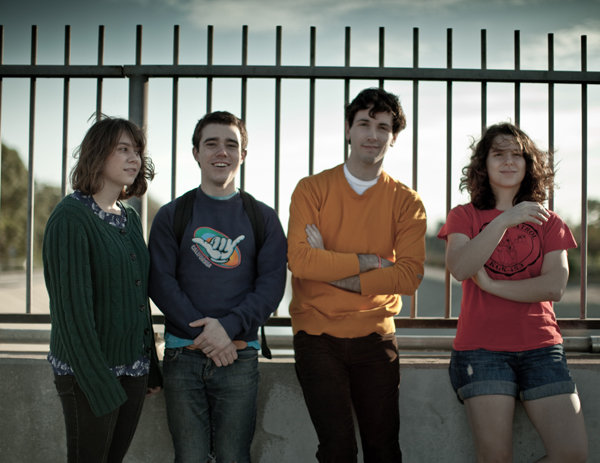 Kicking off Thursday’s show at 7thStreet Entry was the current Afternoon Records roster member, Souix Falls, South Dakota’s We All Have Hooks For Hands. With six members harnessing the band’s folk-infused indie pop, it’s impressive the guys can keep all of their ramshackle, riff-heavy songs from completely disintegrating. They instead charge and cascade; and the three-guitar threat mixed with the trumpet reminded me of something like Cap N’ Jazz on steroids. Their hooks were huge and the high-pitched lead vocals made for a really energetic and youthful performance. They even a broke out a surprisingly tolerable, fun version of the Jackson 5’s “I Want You Back.”

Next up was the female-fronted local act Total Babe. Having never heard them before, I wasn’t sure what to expect from the young, wide-eyed lead singer Lizzie Carolan. But they didn’t disappoint. The band balances Carolan’s soft, twee vocals against riff-heavy instrumentation much in the vein of Belle and Sebastian. Well-crafted melodies and carefully-placed chillwave-esque jingles made them a very pleasurable listen. I can see why they are on some many people’s radars. Although I kind of wish they would have opened as far as the overall flow of the show. We All Have Hooks For Hands would have been a nice precursor to the surging power of Avi Buffalo.

Anyone that has kept up with indie blogs in the past year knows one thing about the new Long Beach, California band Avi Buffalo: “Holy shit! They are all so young. OMG.” Yeah, it’s no secret that the three members of Avi Buffalo aren’t even old enough to drink – and they wore those bold “X’s” on their hands on Thursday night proudly. But on the only side of that realization is that – in the words of Wayne Campbell – they can fucking wail. After seeing them perform, it’s not surprising that Avi alone was able to pull off his songs live as a one-man show before forming the full band. With at least a half dozen pedals at his disposal, Avi himself was a wall of sound held together by the strong rhythm section. The most impressive thing about the songs they played – all of which were from the band’s debut self-titled record – was how much more flushed out and jam-heavy they were. Avi creates incredible sonic waves of sound while also taking time to meander into big, screeching solos. At times, the small Entry seem too small of a venue and at other times it was just right. I was wary if Avi would be able to pull off his high-pitched vocals live, but he hit nearly every note and his voice remained clean and direct. The band has been riding on their debut since April, so they should be releasing new music in the near future. But it was nice to see the debut flushed-out after having soaked in the songs for months – even if the set clocked in at about 45 minutes.

Avi Buffalo     Total Babe     We All Have Hooks for Hands

Do-It-Yourself Retailing January 1, 1991 | Elkins, Marlena; Hamburg, Ruth Housewares How Some Stay Afloat in a Sea of Competition The song remains the same for selling housewares. Carrying the basics and promoting service works for some. For others, houseware and giftware niches are the key. Successful strategies depend on customer base, the market and the retailer’s style.

On a list of 16 channels of distribution for housewares in 1989, the National Housewares Manufacturers Association (NHMA), Chicago, listed discounters at the top. This is no surprise. These retailers position themselves as the places to shop for housewares. “Hardware stores” came in 10th and “home centers” 15th. this web site laguna beach ca

Are hardware stores getting less of the housewares market? SERVISTAR Corp., Butler, Pa., isn’t, according to buyer Kirby Kegel. “In fact,” she says, “more of our stores are taking the opportunity now to get involved with selective market niches within the housewares category which will differentiate SERVISTAR stores from the competition.” Mel Gregory, group merchandise manager for Ace Hardware Corp, Oak Brook, Ill., says housewares is a category that still stands up in a soft economy. “Staple products hold their own,” he says. “Fancy products might lose a little.” Gregory acknowledges that tough competition causes many retailers to opt out of the housewares business. “But after awhile they want back in the market. There is a basic need for housewares.” Survival Strategies – Flexibility helps retailer George Allemenos manage his housewares department. Allemenos’ store is located between several discounters in Indianapolis. Wal-Mart opened a store down the road this fall.

Allemenos has gradually scaled back his housewares department through the years. He once carried a full line of dishwares, cutlery and flatware. Now, he keeps gadgets and basic items in stock, but watches them carefully. If a new item doesn’t sell, he phases it out immediately.

Nowadays, he’s selling a lot to young people and newly divorced men, who like the convenience of his store, which they can’t get at the discount store.

One tactic is to look at what your competitors are doing. Peggy Moses, a buyer for Hader Hardware, a chain in Cincinnati, says her stores have picked up business from other stores that have gone out of the housewares business.

Moses says Hader stores have stuck with the basics, avoiding trendy items. She has even noticed the popularity of electric skillets and crockpots coming back. Trendy items sell well at some stores, however. Tad’s True Value, located in the business district of Myrtle Beach, S.C., sells mostly kitchen gadgets and small appliances in the housewares department. Special order and repair services give Tad’s an edge over competition, as do special weekend promotions. website laguna beach ca

You might as well forget competing with discounters’ buying power in housewares. But when you buy it cheap, sell it cheap, advises Pat Curry, manager of C.M. Love Hardware, Huntington, W.Va.

C.M. Love competes with niche areas within its housewares department. Giftwares, such as candles, baskets and silk flowers, are bigger sellers than housewares, Curry says.

Personal service, of course, is the classic method of competition. This really can give you an edge in housewares, where time can be more valuable to customers than a few cents saved, Curry asserts.

Winona Cowan, owner of Hunter-Cowan Trustworthy, Cedar City, Utah, has a large housewares and gift department and a successful bridal registry. Her services include giftwrapping and special order.

Cowan makes a strong commitment to get to know all of her customers. Women shop the department year-round, but men shop it heavily during the holiday season. Getting to know them then can bring them back as customers later, Cowan says.

While the song remains the same in housewares, with tight buying, an appropriate mix of product and excellent service, you can stay on track for the ’90s.

Buying Update * By the year 2000, spending on kitchen appliances and equipment is expected to rise 35 percent, and top $22.5 billion.

* Mauve is still being fazed out in housewares. Today’s hot colors include white, almond, slate blue and sage green.

* Modern and Southwest looks are picking up in popularity.

* Modern environmental products – such as trash separating bins, bag stands, can crushers, trash bags and environmentally safe household cleaners – are making their way in this category. And housewares manufacturers are using smaller packaging and blister cards.

* Breadmakers will become a staple in full-line housewares/gourmet departments.

* Plastic foam packaging inserts may be replaced by cardboard or tissue paper.

* Crisp, clean and contemporary are the buzzwords in colors and styles for small storage items. White and black are still favorites.

Merchandising Tips Obviously, your product line and merchandising stance will depend on your customer base and your competition. Tailor these tips to your needs.

* Before remerchandising existing displays, think about what categories you can merchandise by use, material, color, etc. By throwing it all together indiscriminately, you lose much display impact.

* When placing cooking utensils on shelving, always point the handles to the right.

* Set off special services, such as bridal registry and gift wrapping, with signage and displays.

* Display selected houseware items – such as appliances – out of the package so customers can see them.

* Use manufacturer tags and p-o-p literature on products and/or boxes. Customers went to know all there is to know about the products before they buy them.

* Promote housewares on endcaps that have a different look than your other endcaps. This look can be easily achieved on steel gondolas by using contact paper.

PHOTO : While giftwares sell more than housewares at C.M. Love Hardware, Huntington, W. Va., managers might rethink these departments when Wal-Mart opens nearby this spring.

PHOTO : Housewares is a fashion category for which display is crucial. Hardware on Hennepin, in downtown Minneapolis, caters to students, office workers and residents. Keeping the department neat, bright and well-merchandised helps attract sales from these one-stop shoppers.