The Scariest Songs Ever (Part II) 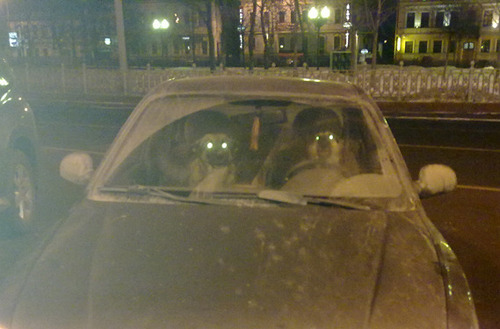 With Halloween fast approaching, “scary” songs are becoming ubiquitous on the radio, in stores, and on TV.  However, while holiday themed songs like “Monster Mash,” are fun, they aren’t exactly scary.  On the contrary, for this feature we asked seven contributors to name the songs that they actually found frightening to listen to.  Here are their answers. (Check out Part I here)

Napoleon XIV – They’re Coming To Take Me Away

Maybe not the “scariest” song in the world sure, but certainly an incredibly creepy first person song about the singer going mad after his wife leaves him and preparing to be taken away to the insane asylum.

What’s that you say? An instrumental can’t be considered all that scary? Mr. Waits and I would beg to differ.

This one is probably pretty obvious and cliche since Nick Cave is the master of the macabre, but it’s one of the first Nick Cave songs I ever heard and the vibe + lyrics of it have always made me feel a bit creeped out.

While this song might have been most famous by Nine Inch Nails cover version that appeared on the soundtrack to The Crow in 1994, the original version definitely outcreeps Mr. Reznor’s angsty take on the song.

Creedence Clearwater Revival – I Put A Spell On You

Again, another one that might be obvious based on the title alone, but CCR’s cover of the Screamin’ Jay Hawkins classic just screams Halloween to me and it definitely doesn’t seem like the love song it was originally intended as.

Mark Lanegan “Dawn of the Dead”
.
Like a few other artists on this list, Mark Lanegan just seems like a scary dude.  He may be the picture of domestic bliss and raise bunny rabbits, but his baritone yelp mixed with heavy, charging music on “Dawn of the Dead” makes it a little easier to imagine something much more sinister.
Radiohead “Climbing Up the Walls”
.
I remember listening to this song in my headphones and actually being creeped out.  Just a haunting song, from the hollow drums to the buzzing soundscape to Thom Yorke’s demented, nightmare inducing lyrics and vocals.
Grinderman “Heathen Child”
.
When Nick Cave sings about all the people and things in your life (Husband, Wife, Government) that you look to for support and then systematically tells you “they won’t protect you” in his Satan on four packs a day growl, you kind of believe him.  Probably could have picked about 3/4 of Nick Cave’s catalog, but picked one of his newest songs since, well, I listened to it yesterday and it kind of scared me.
Fever Ray “If I had a Heart”
.
Somehow Fever Ray, a side group for half of the already creepy Sweedish group The Knife, was even creepier than her original band.  The whole album had the feel of a slasher flick, with each song soaked in impending doom that around each corner was something dark, fucked up and nothing you had any desire to see. If the songs somehow aren’t sufficiently spooky, dim the lights and go to Youtube to watch the videos for each track.
The Rosebuds- When the Lights Went Dim
.
For a clear eyed pop band, “When the Lights Went Dim” is a pretty bleak, spooky song.  It combines the fear of a scary event with the not cool circumstance that you made it safely and your lover did not.
.

Of all the songs on this list, this passes the “driving on a gravel road in the country at night” test with the flyingest of colors.  Some of the sharpest doom vision they ever reached, and never tried to do anything else.

With the lyrics and the video, it’s one of the only hip hop songs that has made me truly worry about the rapper.

Jandek – “Down In A Mirror”

The hills have eyes and they can’t tune a guitar either.

The Manson Family – “No Wrong”

Charles had been in jail for several months by the time this song, which he wrote, was recorded by those he left behind in the Family, but it’s still got a pretty disturbing aura to it.

This represents Sonic Youth at its early darkest, before they had figured out how to make anything resembling pop and when they recorded their albums in a walk-in meat freezer.

Nick Cave and the Bad Seeds: “The Mercy Seat”

Being executed has never been so musical.

Likewise, having an arm amputated gets the David Yow treatment.

This was the first Nine Inch Nails song I ever heard and it scared me away for a few months before I went back for a second listen. The infamous video probably played a huge part in my fear of this track.

For me, Springsteen’s always been a songwriter par excellence in terms of inserting dread into what are otherwise “normal” songs. As early as “Lost in the Flood,” he was creating these great mood pieces, but “Nebraska” has always been the pinnacle of his dark songwriting.

Liars: “The Other Side of Mt. Heart Attack”

While this is theoretically a love song, it never fails to make me uneasy. Is it the droning? The creepy mantras? Angus Andrew’s intensity? I don’t know, but it works.

2. Super Grippy Gloves 7.99, johnlewis.com If you’re travelling light and don’t have room for a mat in your bag, check out these gloves. They have non-slip strips so you can exercise safely wherever you are. website bobble water bottle

3. Light on Yoga by BKS Iyengar 14.99, waterstones.com Iyengar’s 45-year-old classic is still the go-to book for today’s yoga enthusiasts, with pose illustrations, breathing advice and the philosophy of the exercises.

4. Gaiam Block 7.99, johnlewis.com A yoga block is essential for getting into deeper poses without causing strains. This block is wide, lightweight, made from a sturdy foam and has a non-slip base.

5. Simply Karma 4.99, play.com Get yourself in the mood with the Simply Karma boxset, which has four CDs of laid-back beats for meditation and slightly more upbeat tunes for bikram or pilates.

6. Plum Relaxation Blanket 19.95, ruthwhiteyoga.com This 2m fleece blanket can be used as a prop to give extra lift when seated, or to keep you warm when meditating. It’s machine washable for those dusty village hall floors.

7. Natural Fitness Bag 18.95, amazon.co.uk This attractive yoga bag is extra large – so fits most mat sizes – has a double-zip opening, an adjustable shoulder strap and is made from planet-friendly hemp.

8. Holistic Silk Scented Mat 148, harveynichols.com If you fancy some luxury while you practise, this mat has a cosy fleece top and faux leather non-slip bottom. Plus, it’s infused with a calming lavender aroma. web site bobble water bottle

9. Manduka Cotton Straps 10, urbanyoga.co.uk Straps are particularly useful for bound poses if you’re not that flexible. This one is 2.5m long, 100 per cent natural cotton and has a super-sturdy buckle.

10. The White Company Driftwood 18, thewhitecompany.com Scented candles get you into relaxation mode. So light this one up and let the bay, samphire and sea salt aromas nudge you towards Nirvana.