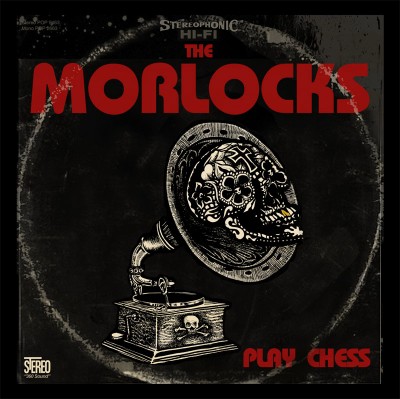 There’s no photo of The Morlocks in my copy of this CD, but it only takes the opening seconds for me to picture the band. They’re rough and rugged. There are stacks of amps that look like they’ve fallen at least a few flights of stairs. The singer stumbles in, wearing sunglasses in the dark club. He pulls a harmonica out of his leather jacket, only to play a few notes before it goes back into his pocket before he starts to howl.

The story of The Morlocks is a couple of decades long and hazy. Formed in San Diego in the early 1980s, existing for a few years in various forms before splitting in 1987 after a few releases, including a record on a young label called Epitaph Records. Most famously, in 1999, Spin magazine wrote an article claiming the death of singer Leighton Koizumi, which turned out untrue. In fact, Koizumi had just been released from prison on a 10-year drug sentence and was trying to reform the band. He got together a new band under the same name with all new players.

Play Chess is the 2nd full length for this reformed lineup of The Morlocks and consists of all covers of Chess Records classics. It only takes 30 seconds of Bo Diddley’s “I’m A Man” to hear where their influence lies: The Stooges. The Morlocks don’t just take any subtlety out of these blues classics; they tear it apart and beat you with it. Most of the songs are turned into a pounding garage rock swagger. Koizumi’s voice doesn’t just sound like Iggy Pop; he’s got the nuances down too. Howlin’ Wolf’s “Smokestack Lightning” almost gets a little too close to the Stooges; I half expect it to turn into “Funhouse” at any moment. That isn’t to say that they don’t get creative with the covers. Chuck Berry’s “Promised Land” is a straight-ahead Ramones treatment, while “Who Do You Love” adds some great surf guitars. The record closes out with Chuck Berry’s “Back In The USA” yet manages to strip out any Chuck Berry-isms, turning it into a straight-ahead punk anthem.

There have been a million bands like this that have played the same chords for years. But you know what? The Morlocks don’t give a fuck, and that’s something I can find comfort in.

The Morlocks
You can stream the record here.