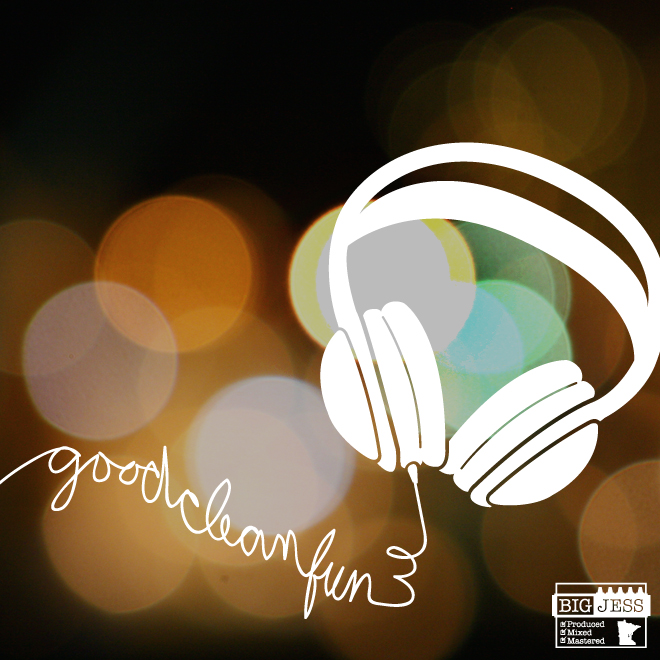 Since the release of Le System D, you’d like to think that the UP’s from Northeast MPLS have been resting on their laurels.  If this double release from Big Jess is any signal to you, the answer to that is a resounding no, as Good Clean Fun 3 and Self Therapy go back to basics for the fans of the Prophets, and bring along a lot of personal reflection and wonderful local guests to the table.

Kicking things off with the staccato and bravado exhibited in “I Will Not Lose,” Jess rides the rhythm like a seasoned jockey, letting his rhymes be somewhat off the cuff and utilizing the words to reflect two different moods entirely.  Good Clean Fun 3 bills it a little bit like a “…and friends” release, with folks chiming in like Mally and Muja Messiah trading bars on “Get It In,” to Abstract Pack alumnus Glo Pesci and Rastar rocking over the reggae tinged “Never Run”.  Elsewhere on the album you have Jess rocking it over the saxophone ivories of “Make My Move,” whereas Mohs joins in with Jess over “Heart Knows”, and the harmonicas are delivered melodically on the song “Hands High.”  The other half of UP’s, MaD SoN weaves tales of hardship and reflection on “Troubled Waters,” while the closer “Incredible” with Jellyfish serves as Good Clean Fun 3 & Self Therapy’s mission statement of making great and serious music while still reflecting upon the days of yore in the production.

Speaking of Self Therapy, things kick off with “Not About Y’all” which serves more as the reflection of Jess and Hip-Hop, where he touches how the music all circles back to him, regardless of all the other things that come along with balancing a family, a full time job, and making music.  “Still Wanna Take It There” is one of the first songs that has sampled a quote from The Karate Kid, provides a backdrop with epic violins and help Jess describe the many hardships and what he’s done to fight and stand his ground with. Elsewhere, the bassy jam “Self Therapy” sounds like a b-side to your favorite Gang Starr 12″,  and ivories are tickled while MaD SoN & Braille join in on “This Is My Callin'” sounds like something that could’ve easily served as an unpolished gem from World Premier.  “Motivate” serves a similar structure to Atmosphere’s “Guarantees” where the bare guitar serves as the co-star with Jess’s self-reflective lyrics, and “Evil Woman” wit Sab The Artist aka Musab is a free-for-all, guitars traverse their way through the organs, serving as an almost M.O.P’ish ode to the shady woman.  “Heard Them Say,” is a well woven tale, and “I Am Him” has an almost psychedelic rock feel, while the military sounding drums providing a backdrop about his own life, providing a well detailed biography, and the closer “Rollercoaster” is sinister to an extent, which display his emotions on full blast.

Again, you can assume that Big Jess has kind of rolled through life, and you can certainly see how these two albums reflect the man up close and personal.  On one side, is a man who loves the music, and his friends who make it, and on the other is a man who unveils many things about his own personal life.  Both sides are very well detailed and seek to serve more as a biography and a purpose.  Big Jess definitely does a great job in making two succinct and well made projects, and you can consider both Good Clean Fun 3 and Self Therapy two more awesome projects in the Unknown Prophets discography.

Catch Big Jess tonight with Big Zach and many others as the two celebrate their latest releases at the Cabooze.  Music is at 9 and tickets are $7.

Charleston Daily Mail August 4, 2003 | GEORGE HOHMANN IN the turbulent world of retail, you can count on Sears.

Sears has outlasted many competitors in the Charleston market, including O.J. Morrison, The Diamond and Stone & Thomas. Regionally, it has outlived Hills and Ames. And nationally it has survived while some once-formidable competitors, including Montgomery Ward, have disappeared.

Although the names of the competitors have changed during Sears’ 117-year history, the battle for shoppers’ dollars has grown more intense. Sears now competes with other department stores, including Kaufmann’s and JC Penney; mass merchandisers like Wal-Mart, Kmart and Target; and big-box specialty chains, including Lowe’s and Circuit City. in our site sears coupon code

Trinkle said Sears’ pay is competitive with others in the market.

“All of our store managers are from the region,” she said. “Local talent is building Sears.” Meanwhile, the competition never seems to let up. Business Week reported in July that for the last 22 months, sales declined in Sears stores that have been open for at least a year, “and they have done so despite all efforts to stop the bleeding, such as Sears’ acquisition in 2003 of apparel catalog outfit Lands’ End.” Sears isn’t taking challenges lightly. Consider appliances. Sears is the leader with a 39 percent national market share. The company says that is triple the closest competitor’s. But Lowe’s and Home Depot have been eating into that share.

In May, Sears responded. It expanded its offering of so-called “value priced” products, offered lower prices on some models and began testing three in-store layouts: An expanded value center, with value-priced products grouped in one area; a “good,” “better,” “best” presentation that lets shoppers see the lowest-priced products as they enter the department; and a floor plan that organizes appliances from “good” to “better” to “best,” by brand. this web site sears coupon code

The company also improved its appliance department signage, expanded its offering of appliances that customers can take home the same day, introduced a price match policy and launched an advertising campaign to highlight the changes.

“One of the main reasons we have been able to lead appliance sales for so many years is our ability to adapt to our customers’ needs,” Tina Settecase, Sears’ vice president and general manager of home appliances, said in a prepared statement. “Our store sales associates’ knowledge, exceptional service and selection of brands is unmatched by any competitor and will not change.” “But we are making improvements that will freshen and enhance the appliance shopping experience.” Trinkle said, “The home appliances departments in Bluefield, Bridgeport and Morgantown were just remodeled and expanded.” Another example of Sears’ efforts to keep customers and attract new shoppers is last year’s acquisition of Lands’ End. Sears bought the nation’s largest specialty clothing catalog company for $1.9 billion.

“The sale will allow Sears to focus on one business – retail and related services – rather than two, and gives us a single purpose for being, focused on enabling the good life for our customers’ home and family needs.” “Selling our credit business and linking with Citigroup is the next natural step in our efforts to build a new Sears,” Trinkle said.

“The past two years have been focused on fixing what’s not working,” she said. “We have exited unprofitable businesses and promotions, enhanced our merchandise offerings with Covington and Lands’ End, and improved our shopping experience with a new store model and enhanced presentations.

“We have improved the company’s profitability with a more efficient cost structure.” With the sale of the credit and financial services businesses, Trinkle said, “we are simplifying and further focusing the company. A profitable, more-focused business gives Sears the ability to grow.” The company plans to completely remodel its Sears stores in Mount Hope and Bridgeport next year, Trinkle said.