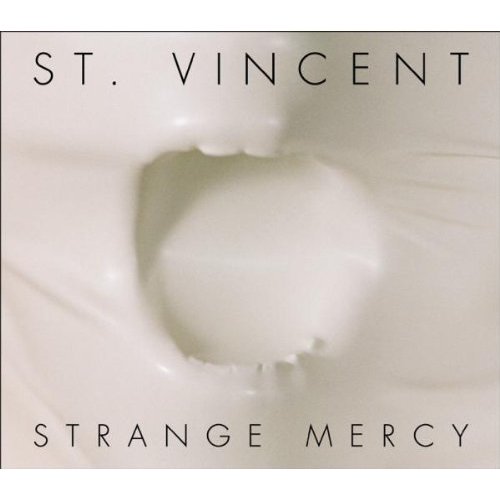 It can be difficult to gain a balanced perspective on an album after reading a single summary of the music. Bias can tilt a review, as can personal taste, history and just about everything else that is unique to the person writing it. So in an effort to offer an expanded perspective in such a medium, here are four reactions, four impressions, Four Takes on Strange Mercy by St. Vincent.

Kyle Matteson (Solace)
91/100
St. Vincent’s Annie Clark has now released three critically acclaimed albums in the last 4 years, and while I was a big fan of her debut ‘Marry Me’, her follow-up ‘Actor’ left me a bit cold other than a few songs. I’m happy to say that with her latest epic ‘Strange Mercy’ that she totally knocked it out of the park. Not only is it her best album to date, and one of my favorite albums this year, but it finally showcases her virtuoso guitar playing on album. Combined with incredibly gorgeous vocal melodies (see: Champagne Year, Year of the Tiger, Cruel), Clark has carved out a very interesting niche for herself, in that her music, while very pop oriented, still has a weird and interesting edge to it that keeps her from sliding into a troubadour songstress role. If I’m allowed to nitpick a bit, some of the lyrics and choruses on a few tracks are a bit too repetitive for my taste, but that obviously does help with the albums catchiness too.

Strange Mercy starts out with a dud.  The lead track, “Chloe in the Afternoon,” has an irritating repetitiveness that has me reaching for the skip button around the one minute mark every time.  (It doesn’t help that the grating lyric is the American title of one of my all-time favorite films.)  However, Strange Mercy quickly gets on its feet and delivers an eccentric, dreamy album that fuses ‘80s style synth-pop with fuzzed-out guitar rock, enigmatic lyrics, sumptuous vocals, beautiful melodies and of off-kilter song structures.  Lead track aside, the album is a complete winner.

Annie Clark seems more confident and more capable as a singer than she was on 2007’s Marry Me.  While that album was delivered in a reigned-in, almost flat, sing-speak, here she stretches out her vocal range and doesn’t hesitate to belt it out when necessary.  Her guitar playing also seems to have taken a big step forward.  On several tracks, like “Neutered Fruit,” “Dilettante,” and “Hysterical Strength,” she lets the guitar hooks carry the weight, replacing much of the classical orchestration of Marry Me.  Clark has an uncanny knack for fusing very dissimilar elements and making it sound organic, and altogether, she just seems smarter and edgier than Feist, Emily Haines, or any of the other female soloists with whom she inevitably gets compared.  Strange Mercy will no doubt push her into the top-tier of indie stardom.  It’s a brilliant album that deserves the early acclaim it’s getting.  So enjoy these songs before they start appearing in i-Pod and Volkswagen commercials.

I’ll admit it. I’ve never been overly interested in Annie Clark and her St. Vincent moniker. Hell, even mild intrigue was sometimes hard to come by. I went into my first listen of Strange Mercy with cautious indifference, but I ended that first listen with anticipation of when I could push play on track #1 again. This album is hypnotic, graceful and unmistaken in its beauty. Strange Mercy isn’t just St. Vincent’s best album, it’s also one of 2011’s brightest outputs.

Strange Mercy manages to sound cohesive even when its individual songs are nothing alike. “Cbloe in the Afternoon” is a spastic starter that finds every instrument playing against the vocals in the most intoxicating sense while “Cruel” is sultry and funky and the kind of track that should someday make its way into a Quentin Tarantino film. “Cheerleader,” “Surgeon” and “Neutered Fruit” all share a dark surging industrial backdrop that haunt the listener’s senses as Clark sings cavalierly and with envious mystique. “Champagne Year” is an auditory tease, though, shatteringly simple (in a good way) but all too short, ultimately begging the listener to ask what happened in the editing room. Even here, though, Clark’s confidence (one of the album’s recurring themes) oozes forth. That confidence hits its peak in the album’s closer, the cheeky “Year of the Tiger,” which features her casually chanting “Oh America, can I owe you one?” before a quick upward distorted scale abruptly signals her calling it a day.

After this gem, you don’t owe us a thing, Annie.

St. Vincent’s Annie Clark has professed to “virtually unplugg[ing]” for her third album, Strange Mercy, making it more about “guitar and voice” than her computer-assisted first two.  Though to listen to Strange Mercy, that back-to-basics aesthetic isn’t immediately apparent.  The eleven tracks seem, if anything, even more slickly produced and heavily layered than anything Clark has produced yet.  However to listen to Clark’s lyricism the stripped down aspect of the new music is more recognizable.  Though Clark has always written incredibly emotional songs, Strange Mercy does even more to evoke the singer songwriter sitting with her guitar, talking about her angers and insecurities.

Except that Clark is more likely to be standing than sitting.  And she’s more apt to be shredding her guitar than gently strumming it.  Her virtuosic skill with the axe is one of the most immediately apparent themes throughout her music, and Strange Mercy is no exception.  Throughout Strange Clark picks, strums, and noddles her way through rock songs that sound influenced by genres as varied as folk, disco, and electronica.  The ending of “Surgeon” even evokes comparisons to early Parliament Funkadellic (it’s pretty freaky). But despite Clark’s formidably virtuosic guitar-ism, the melodies still come through straightforwardly and to a lovely effect.  It’s possibly Clark’s prettiest album thus far, and yet also her most technically accomplished.  Clark’s records just keep getting better and better, and Strange Mercy is the best to date.

An abstract of the invention, released by the U.S. Patent & Trademark Office, said: “A system and method is provided for controlling the mode of operation in a UWB receiver. In one variation, the system and method determines the mode of operation by reading a set number of samples of the signal, estimating mode parameters, calculating a mode probability, and then transitioning in a finite state machine between a track and an acquisition state depending on the value of the mode probability. Exemplary versions of the mode controller include a signal to noise ratio calculator, a signal and noise power estimator, and an automatic gain control initialization circuit.” The inventors were issued U.S. Patent No. 7,110,473 on Sept. 19. site debt to income ratio calculator

The patent has been assigned to Freescale Semiconductor Inc., Austin, Texas.