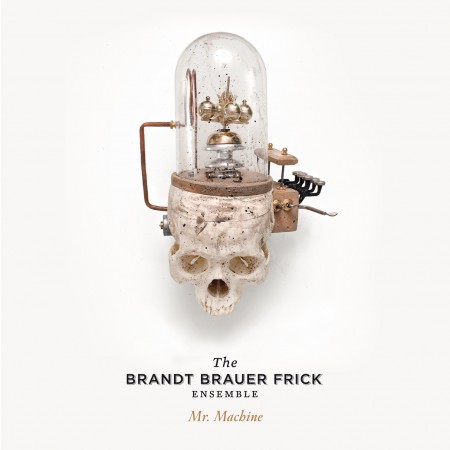 German trio Brandt Brauer Frick Ensemble (named for each of the members, Daniel Brandt, Jan Brauer and Paul Frick) perform a unique style of music that blends classical instrumentation with minimalist techno.  The result is avant garde yet highly palatable orchestrations that bring to mind a meeting of the old world and the new.  And while forward thinking classical music certainly isn’t anything terribly new, the BBFE do so in a way that has the potential to attract not only fans of difficult esoteric music but “regular” music fans as well.  The reasoning being that their sound is technically diverse without being willingly obtuse.

The BBFE’s new record Mr. Machine is a playful foray through eclectic rhythm patterns that are interwoven to form multi-level platforms of sound.  Said rhythms are formed by a multitude of instruments, including piano keys, timpani, various strings and brass to name just a few.  The songs often start with simple repetitive beats and, like a “orchestral-oriented” krautrock, take on progressively more complex character throughout the course of a piece. A few of the songs on Mr. Machine feature vocals, most notably “Pretend” which includes some ethereally chanted words from Berlin based musician Emika.  Elsewhere the record is largely instrumentals, from the epically dread creak and mumble of “You Make Me Real” to “Teufelsleiter’s” timpani-fueled bombastic score.  The record’s eight tunes are as diverse as they are long (many of the songs clock in at seven plus minutes) though the chain that links them together is a similar approach to rhythm-focused orchestrations.

The epic scope and almost cinematic feel of many of the songs on Mr. Machine should lend to an engaging stage performance, and though the band rarely tours we’ll be getting a unique opportunity to hear them in the Twin Cities this fall.  The band will perform at the Cedar Cultural Center on October 24th, one day before Mr. Machine is officially released on !K7 Records and shouldn’t be one to miss.