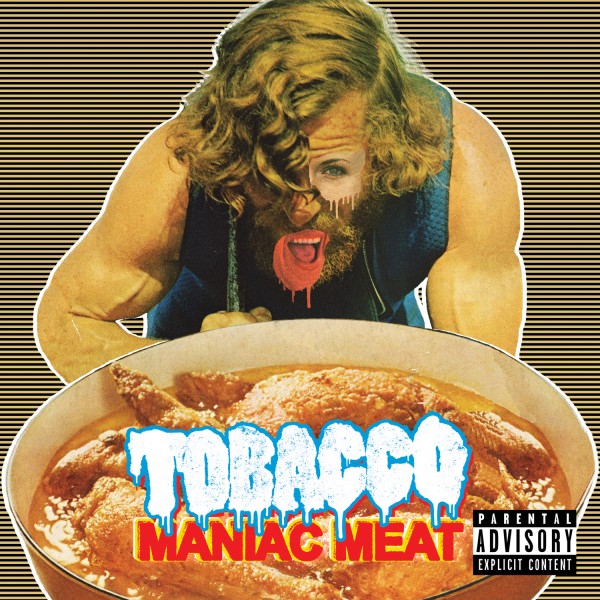 Like I mentioned before, I seem to like side projects for the band Black Moth Super Rainbow more than I like the actual band.  After releasing the spellbinding electro/hip hop/brain melting psychedelicaof his last album Fucked Up Friends, BMSR frontman Tobacco is back with his latest warped opus, the equally great Maniac Meat.  The albums, um, weirdness is pretty well represented by the album cover above, which should get the listener ready for the fractured yet melodic beeps and hisses that permeate through the CD.  Check out Tobacco live tonight (4/2) at the Triple Rock for what should be a great show also featuring The Hood Internet and The High Places.

US Banker October 1, 2005 | Brenner, Robert Many banks are starting to cover students’ origination fees for education loans. But geography will determine how far three percent gets them.

To better compete in the highly competitive market, more banks have begun paying the federal government’s three percent loan-origination fee, traditionally passed on to the borrower. It’s a bold move-one certain to make a bank more appealing to students. But whether this move is putting banks ahead of the game, in line with the competition or fortifying its defenses is a matter of geography.

Six years ago, the Pennsylvania Higher Education Assistance Agency initiated the KeystoneBEST loan program, offering to underwrite one origination point on loans made to students attending college in the state and encouraging the originating bank to underwrite the other two. The move sent a ripple through the industry that is becoming a wave in this lending season. “Initially, it was an aggressive move to get a competitive advantage and now it just remains the norm to keep up with competition,” says Tom Lustig, director of marketing for PNC Bank’s education-loan center. The bank joined the program in 2001, but is expanding it this academic year. The bank has seen between 12 percent and 15 percent growth each year in business and expects up to an eight percent increase this year, owing to its additional underwriting. The bank expanded its partnerships in January to include lending organizations in eight other states. here citibank student loan

The top three loan originators under the Federal Family Education Loan Program for fiscal year 2004 were the Sallie Mae Corp., Bank One and the Citibank Student Loan Corporation, according to the Department of Education. From fiscal year 2003 to fiscal year 2004, these lenders’ portfolios increased 33 percent, 18 percent and 14 percent, to $4.2 billion, $3.9 billion and $3.4 billion, respectively.

On June 5, SunTrust Bank began underwriting all three origination points in Tennessee. Last year, it underwrote two; in 2003, it was only one. “We decided [it] would be a good move, because it was a key market for us,” says Marke A. Thomas, svp and business-line manager of SunTrust education loans. He concedes the move was primarily a defense mechanism. Thomas believes the movement toward zero-fee origination is fueled by the recent boom in the loan-consolidation market-a business SunTrust courted aggressively. “Maintaining that origination ability up front with school volume is critical to growing your consolidation effort,” he says. go to web site citibank student loan

First Horizon National Corp. began offering zero-fee origination to students attending school in Tennessee through First Tennessee Bank on June 1. The decision was a reaction to larger regional banks’ attempts to move in on its territory, says Dondi Black, svp of consumer lending for First Horizon. While Black acknowledges the additional expense of underwriting will hurt the bank’s bottom line, the bank has its eye on the bigger picture. “We were looking at the opportunity for the total relationship,” she says. “Over the lifetime of the relationship, we feel comfortable this is a value proposition we can accept.” Officials were unable to quantify the program’s impact on revenue.

Congress is considering proposals to cut the three percent origination fee over the next five years, eliminating it by 2010. “There’s [the] thought that, by the end of the year, the president will sign it,” says PNC’s Lustig.