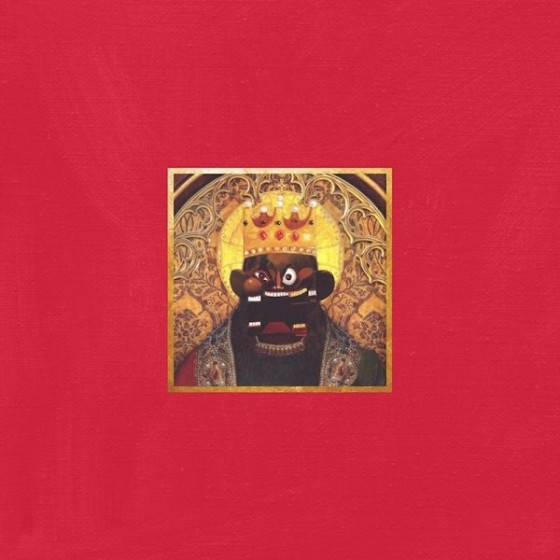 It can be difficult to gain a balanced perspective on an album after reading a single summary of the music. Bias can tilt a review, as can personal taste, history and just about everything else that is unique to the person writing it. So in an effort to offer an expanded perspective in such a medium, here are four reactions, four impressions, Four Takes on My Beautiful Dark Twisted Fantasy by Kanye West.

Worldwide Twitter star Kanye West has a little known side project – turns out the verbose social networker also fashions himself as something of a rapper.  And while West’s raps and his tweets are technically two completely different platforms, on new record My Beautiful Dark Twisted Fantasy the two seemingly collide, with West’s lyrics often coming off similarly to his 140 character aphorisms.  And while I have been guilty of calling West a bad lyricist, I definitely admire his willingness to be bizarre, with puzzlers like “have you ever had sex with a pharaoh” or “no more drugs for me / pussy and religion is all I need” making for excellent would-be tweets.  I no longer think that West is a bad lyricist – I think he can be great – it’s just that, as in his rambling stream of thought social networking, West doesn’t seem to know when to self-edit.  For instance more discerning rappers might have cut out the Napolean Dynamite line from “Monster” or the sqeaky voiced “satan, satan, satan” line in “Devil in a New Dress.” But I have to say, while I think West’s lyricism is full of odd choices, I do generally find it a lot more interesting than most rapper’s run of the mill “hustla” fare.  When he’s not taking strange detours West occasionally paints vivid portraits of a William Randolph Hearst type character – a man who has it all, or does he?  West’s inability to connect with a partner seems to be at the center of his woes – he makes no apologies for his voracious sexual appetite but in the same breath cries over the lack of depth in his relationships.  In “Blame Game” he misogynistically tells a potential mate “stick around, some real feelings might surface.”  In that story though, West ends up being the one with the broken heart: he even goes so far as to call out his siren, Chloe Mitchell, by name.

Overall I am not the biggest Kanye fan and that certainly hasn’t changed after listening to My Beautiful Dark Twisted Fantasy.  That doesn’t mean I don’t think it’s a good album though – while it might not be my taste, I can objectively admire how West brazenly puts his whole soul on display, dark sides and all.   And I actually really like the record’s lead single “Power.”   As for the rest I’ll file it with most of the rest of Yeezy’s output under “good but not really my thing.”  Maybe one day I’ll come around.

I think Kanye’s many haters have to give him credit for one thing: he has a lot of guts.  That’s lesson number one to take away from My Beautiful Dark Twisted Fantasy.  I don’t think another successful mainstream rapper would have the intestinal fortitude to make this album.  Maybe Andre 3000, but he doesn’t seem to be interested in music anymore.  Like Andre, Kanye is in a position where people expect him to be eccentric, at least in his public life.  But even after 808’s And Heartbreaks, which felt like a one-off gimmick, Kanye has never really been an artist whose music makes listeners question whether or not he’s gone crackers.  This one will get him a lot closer to that kind of rep.    Nearly every track is over five minutes, some in the eight and nine minute range, and few feel like hip hop tracks, even when they feature rapping.  They tend to take big, cinematic twists towards the end instead of a traditional fadeout.  He put a lot of thought into things like vocal effects, trying to create new sounds, and he largely succeeds in doing so, even though the result still feels familiar most of the time.  Kanye has always been a master of the drum machine, and that talent along with a general talent for effective studio subtelty is as present as ever.  But in the end, this is not a rap record.  The traditional and simple verse-chorus-verse format feels totally absent, even when it’s there.  It sometimes feels like a closer relative to what people like Tricky and Beck do than it does to Jay-Z (who features on two tracks).  If nothing else, this will be a fun record to look back on in twenty years.  It could look like genius or a total failure.  But even if hardcore hip hop fans will want to strangle him for choosing to use Pusha T’s talents on a track like “Runaway,” that’s also part of what makes the album interesting, and you have to admire the effort put into creating it.

Kanye West is back and on fire after bringing the soft electro of 2008’s 808’s & Heartbreaks, which received equal amounts of love and hate from longtime fans. On his fifth solo record My Beautiful Dark Twisted Fantasy, West returns to his roots – making experimental, hard-core hip-hop music. West’s drunken outburst at 2009’s VMA Awards with his rip of Taylor Swift and its massive fall-out, led to West disappearing for awhile. He is toughening up (as with many major black artist once they get dissed by the mainstream) and is regaining even more respect by his peoples as he fights for redemption. West began to describe the new record as “no electro, no emo” and said that he wanted to make a record with old school b-boys in hip-hop producers in Pete Rock, RZA, DJ Premier, and Q-Tip to capture the boom-bap of the classic era. Loaded with guests, it’s like West is doing a Quincy Jones by conducting a supporting cast of Jay-Z, Kid Cudi, Rihanna, Pusha-T (The Clipse), RZA, Raekwon, Bon Iver, John Legend, Elton John, Elly Jackson (La Roux) and Rick Ross.

Opening with the RZA produced “Dark Fantasy”, he explains that “the plan was to drink until the pain’s over” then asking “but what’s worst, the pain or the hangover?. The sinister “Gorgeous” with Kid Cudi & Raekwon is a fiery street anthem. West goes in for the gold, and is coming for whoever has it: “I treat the cash the way the government treats AIDS, I ain’t gonna be satisfied ’til all my niggers get it, get it?”. Surveying the landscape West theorizes “Is hip-hop just a euphemism for a new religion, the soul music of the slaves that the youth are missing, but this is more than just my road to redemption”. The thunderous “Power”, with sample of King Crimson prog-rock classic “21st Century Schizoid Man” included works incredibly wells as he puts haters on notice “ I guess every Super hero needs his own theme music”. He see’s a community wrapped in bleakness “the system broken, the schools closed & prisons open, we ain’t got thing to lose motherfucker we rolling” and celebrates. For all of you who doubted him “You short-minded niggas’ thoughts is Napoleon, my ice done brought the goalies in, now I embody every characteristic of the egotistic, he know, he so fuckin’ gifted.”

The epic “All Of The Lights” features Alicia Keys, Charlie Wilson, Elly Jackson, Elton John, Fergie, Legend, Kid Cudi, Rihanna, Ryan Leslie, The-Dream & Tony Williams. It is followed by another all-star-cast of cameos on “Monster” with Jay-Z, Rick Ross, Nicki Minaj & Bon Iver; although it’s also annoyingly stacked with guests, it still works as a guilty pleasure. Early favorite the hard as nails banger “So Appalled” that employs Jay-Z, Pusha -T & RZA. With RZA’s warbling ”30 Whites bitches, it’s fuckin’ ridiculous” makes the hard track melodic as Jay-Z offers “I went from the favorite to the most-hated, but would you rather be underpaid or overrated?” The shining centerpiece is the slow burner, soulful banger “Devil In A New Dress” with a new, if unneeded verse from Rick Ross. Triumphantly drenched in drama is the 9-minute “Runaway”, which showcases Pusha-T menace before finishes with 3 minutes of the instrumental. The elegant ballad “Blame Game” with soul crooner Legend, West shows his playfulness in arguing back and fourth with a lover as if it’s a sport to play the “Blame Game”. A track that doesn’t work is the schizophrenic “In The World” which gets an assist from indies golden voice Bon Iver and a Gil-Scot Heron sample. Despite that, the albums brilliance is found in its intricate layers of production.

West’s My Beautiful Dark Twisted Fantasy is engaging, defiant, elaborate, dark, celebratory, West has crafted as a modern classic, although it’s a bit cluttered, that could be forgiven. Does West exaggerate? Yup yup and with the highest attention to detail, he celebrates black music in 2010 and dethrones all of his pop contemporaries for the year’s brightest record.

In pop music (especially hip hop), we so often define “innovative” and “forward-thinking” by looking at aesthetic elements—creative use of samples, crazy flow patterns, weird time signatures, ZOMG synthesizers, etc.  Lyrical content and subject matter, however, rarely get mentioned in this conversation.  “My Dark Twisted Fantasy” is definitely going to be called innovative and forward thinking, but it’s also a textbook example of what I was talking about in this Reviler piece on the importance of lyrics: it’s a beautiful, technically-impressive album, but West’s lyrics just don’t match the majesty of the music.

That isn’t to say that Kanye West isn’t a great MC.  I think he is, in a lot of ways—tons of personality, funny punchlines, good technical ability, occasional insightfulness.  And there’s nothing inherently wrong with just making good music and rapping about whatever over it, but when you’re reaching for superlative greatness (as West so obviously is here), content needs to be more than an afterthought.

Most listeners, however, won’t give a damn.  The album sounds absolutely epic, and while a few songs drag on too long (blame hubris; I almost preferred the condensed sampler version in the “Runaway” video), they’re all full of grandeur and lush, multi-layered arrangements.  If nothing else, it’s an album that invites active, thoughtful listening; these days, that’s a pretty big triumph.