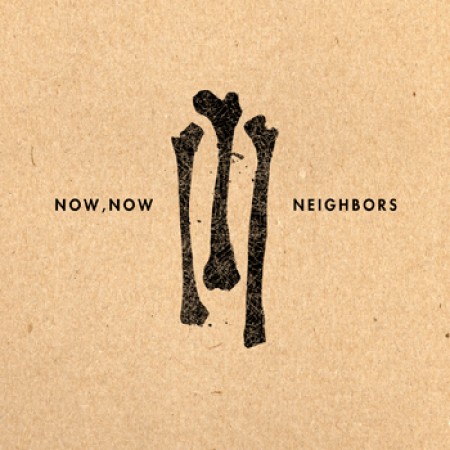 Minneapolis trio now, Now Every Children may have dropped the “Children” to distance themselves from childish things, but the young band still has a ways to go towards finding an “adult sound.” Still, the group’s newest EP Neighbors certainly shows promise that they are headed in the right direction.  While the group’s five new tunes may still tread in the emotive melodrama associated with the tween crowd, they also show newfound maturity in their lyrics and musicianship.  When you are young it can be hard to get people to take you seriously.  To lead singer/songwriter Cacie Dalager’s credit though, the content of Now, Now’s songs is not easily dismissed.

Easily Neighbors’ biggest standout, the titular track offers an incredibly catchy hook, as well as a well fleshed out melancholy post punk sound.  The sleigh bells are a particularly nice touch, and Dalager’s vocals sound plaintive and stoic (unlike many of her peers, Dalager and backup vocalist Jess Abbott wisely avoid emotional histrionics in favor of a more mature, staid approach).  “Roommate” and “Jesus Camp” are nice additions as well; particularly the latter with its quiet synths and well placed strings accompanying Dalager’s heartrending whisper.    On the flipside “Giants” sounds a bit too slick and over produced, and Dalager’s religious references are more overt and heavy handed (“If I believed in god I would not have done the things you’ve done / Because you’re only half willing to follow the son.”) The EP also includes additional acoustic renditions of “Giants” and “Neighbors,” of which the latter would be a welcome addition if it didn’t sound quite so similar to the original “plugged in” version.

Overall Now, Now has quite a bit to be proud of in Neighbors though, as well as the newfound level of maturity that seems to now be just within the band’s grasp.  Though the trio’s fanbase still seems to be largely made up folks born in the nineties, if Neighbors is any indicator, I wouldn’t be surprised if it wasn’t long before more adults start to come around as well.

The Neighbors EP is available now over at No Sleep Records