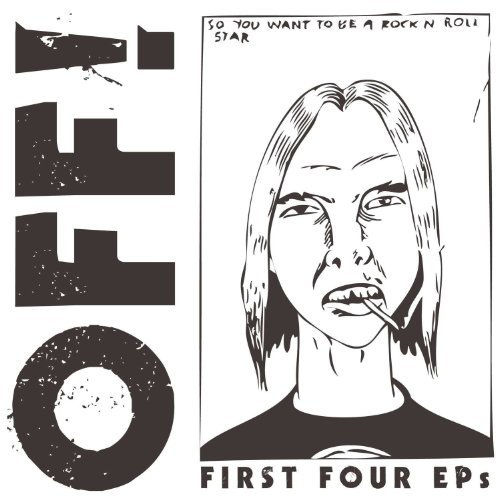 Sometimes it takes a group of old timers to show how the kids how it’s done. Late last year, Keith Morris (Circle Jerks, Black Flag) and Dmitri Coats (Burning Bridges) formed the band after Coats worked on an a failed attempt Circle Jerks album. They enlisted Red Kross bassist Shane McDonald and Rocket From the Crypt/Earthless drummer Mario Rubalcaba to round out the lineup. First Four EPs is a collection of four 7”s released within the last year.

The First Four EPs says 1980s Los Angeles hardcore in every way possible, right down to the Raymond Pettibon artwork. The band tears through 16 songs in roughly the same amount of minutes, with no song exceeding a minute and a half. OFF! isn’t reinventing the wheel here or anything, but really who needs that? Each song is a quick barrage of what made 1980s hardcore so great. Morris covers the classic topics, from alienation and anger to drugs to a general disgust for society. Drums and guitars are a constant fury that barely even let up for a guitar solo or two over the course of the record and roughly 18 minutes later it’s done.

OFF! does nothing new here but really but that’s really not necessary. First Four EPs is a great collection showing a legend of 80s punk making a great return to form. Let’s hope OFF! keeps doing exactly what they’re doing here.