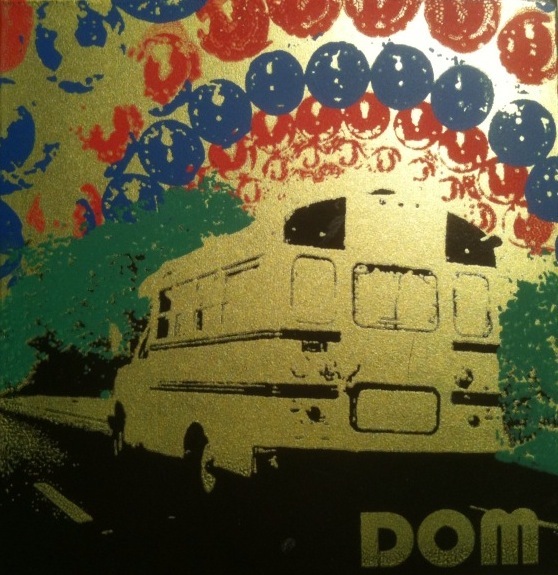 If I were to give a grade on the chance that a certain album would strike a nerve with a larger audience, a bet on success if you will, I could easily multiple my score above by four.  For better or for worse, my score isn’t a prediction, but a reflection on whether I think a album is something that is worthwhile and original, basically something I would be able to recommend to a friend.  Under those guidelines, the trite, hollow and downright tedious debut EP Sun Bronzed Greek Gods by Dom gets a score about as low as I can give for a band that writes and records their own music and isn’t a)trying to be Nickleback or b)was conceived on a reality show.   I have a strong hunch many people will disagree with me.

The EP feels like a band that got together and skipped even pretending that they wanted to make good music and went straight for being “the biggest band in the world.”  The type of band, like the Killers, who reference U2 not for their actually decent earlier work, but for their business acumen of their later, “we will sell anything to anyone in hopes of becoming billionaires” material.  When you readily admit to wanting to be the “Madonna of Garage Rock,” no matter how much you are trying to be ironic, when the material sounds like Sun Bronzed Greek Gods, you can’t help but be perceived as a band who, while not having achieved anything, have already have sold out.   Like MGMT, there will be a temptation (and probably an acquiescing) of mainstream critical opinion that these guys are doing something unique or original, but I couldn’t disagree more.  Sun Bronzed Greek Gods, from the breezy pop of album opener “Jesus” to the cheesy album closer “I Wonder,” is the trial balloon from a band that use the “indie” label and the American Apparel group-think to move forward what is essentially a business plan to get famous.  In a time when there are so many bands great bands toiling away unrecognized, the fact that it seems easy to predict that this drivel is going to blow up is both depressing and frustrating.

The EP, mercifully, is only seven songs long, but with tracks like the radio baiting single “Living in America,” I had trouble making it through the 3 times I listened to it for this review.  Maybe I am wrong and the band won’t be this year’s MGMT, but it sure seems like the sound/look/style are all in place for it to happen, especially after MGMT released an album that wasn’t what the Spin/Rolling Stone crowd was looking for.  Above and beyond whether the group makes a dent in the public consciousness, Sun Bronzed Greek Gods feels like a hollow stab at creating something “unique” and every step of the way the songs fall flat on their face. I am wildly supportive of weird, left field pop music, but when it feels so calculated, pretentious and thought out as Dom does, I just can’t get on board.

The ACLU has dropped its claims against the City of Santa Monica. The lawsuit’s dismissal is complete. It requires no monetary payment of any kind, no change in any City law, policy or practice and no admission of any fault whatsoever.

Santa Monica is known nationwide for its long history of responding to homelessness with compassion, innovation and funding. For these reasons, the ACLU’s lawsuit was a waste of their resources and a failure to understand Santa Monica’s extensive work. Said Mayor Bobby Shriver, “When it comes to addressing homelessness, Santa Monica is the regional leader. We believe the lawsuit was unnecessary and a distraction. Everyone needs to focus on regional issues to solve homelessness in Los Angeles once and for all.” The Action Plan to End Homelessness in Santa Monica is a focused strategy developed by the City with local service providers and other agencies to ensure the most vulnerable and chronically homeless people on the streets are served. Its ultimate goal is permanent, supportive housing. Further, there are over 450 shelter beds available to homeless individuals in Santa Monica, much more than most other cities in the region. site santa monica zip code

Key components of the Action Plan include a Homeless Community Court (with major funding from LA County); an Eviction Prevention and Rapid Re-Housing program (that since November 2009 has assisted 70 local low-income households impacted by the economic downturn); a Service Registry (that directs resources to over 400 chronically homeless individuals, including veterans, who have been on Santa Monica’s streets for an extended period of time); and Project Homecoming, (a program which since 2006 has reunited over 650 homeless individuals with family and services in their home towns). here santa monica zip code

Santa Monica’s taxpayers fund over 20 non-profit programs to serve the homeless population. In addition, the Santa Monica Housing Authority provides rental subsidies to homeless and formerly homeless individuals for permanent housing. In total, Santa Monica spends $5.7 million annually on these programs. Therefore on a per capita basis the City spends $60 per resident to address homelessness, far outstripping what other localities spend. In addition, local nonprofit organizations use City of Santa Monica funding to successfully leverage other regional, state, and national dollars. As a result, for every $1 of City investment in homeless programs, local agencies raise on average $12.63 from other sources.

While Santa Monica has excelled in serving those in the community that are most vulnerable and living on the streets, homelessness is ultimately a regional, state and national problem. The City continues to call for a sustained approach to homelessness wherein each jurisdiction does its fair share to address the needs in their own communities.