Do Look Back | The Glass Harmonica 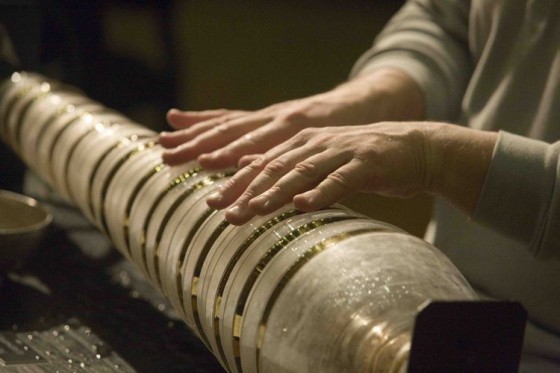 While in our Do Look back series we usually examine older records that deserve a dusting off, in this case I think that the sheer peculiarity surrounding an all but forgotten musical instrument, the glass harmonica, is well worth taking the time to re-examine.  I mean, few instruments have quite as unusual a history.  Also, few instruments look this cool.  I mean can you imagine seeing one of these spinning gyres of glass being played at a local club?  I for one, would love to see that happen.

The glass harmonica (also known as a glass armonica) as we know it is generally attributed to having been invented by Benjamin Franklin, though the idea of using crystal glasses to produce tones has been around much longer.  What Franklin did was to fashion a series of glass bowls that gradually increase in size the further one moves up the instrument.  The whole contraption spins the rings around in a circle, and the harmonica can be “played” by wetting one’s finger and holding it to the glass.  The tones are unearthly pitches – much like what you can replicate on a synthesizer but as anyone who has ever dragged their finger around a wine glasses’ rim could tell you, much more resonant.

The bizarre, otherworldly pitches of the glass harmonica led some to believe that the music could cause someone to go mad.  In fact, there were several cases of the instrument’s users actually doing just that back in the eighteenth century, but modern scholars generally attribute it to the fact that back then glass contained unsafe amounts of lead and could possibly lead to lead poisoning (though there isn’t much scientific basis for this claim).

Occult German physician Franz Mesmer used a glass harmonica in his treatments of patients in which he practiced his theory of “animal magnetism,” or using human magnetic forces to cure ailments.  Mesmer would lull his patients in to a sort of hypnosis using the armonica, and for that reason we now use the word “mesmerize” synonymously with hypnotism.

While definitely one of the cooler instruments of its day, the glass harmonica eventually fell out of fashion and has all but disappeared from modern music – partially because the instruments are incredibly hard to come by.  Few originals still exist from the instrument’s heyday – however notably there is one pristine 18th century version housed in our very own Bakken Museum, which purports to come directly from the descendents of a neighbor of Franklin’s.  Another big reason for the instrument’s decline is that it was never very loud – and in huge concert spaces it simply could not be heard (there weren’t means to amplify the sound back then).

Glass harmonica music is still produced today, but usually only by a handful of classical musicians who generally bury the instrument’s unique sound under other orchestrations (these tend to usually be of the easy-listening variety).  This, I think, could potentially be an extremely interesting opportunity for an aspiring musician out there.  The armonica isn’t really in use in popular music today, but consider the potential!  Dream pop, psychedelic rock, experimental  music – what better way to differentiate yourself from the hordes of bands than by becoming one of the only artist’s in the country to play a Ben Franklin-invented instrument that people used to be afraid of for fear of going crazy?   Sure it would be hard to get one but I am willing to bet that they wouldn’t be impossible to build – and modern technology could do wonders for amplifying the sound.  I am eagerly awaiting the day when someone picks the discipline out of obscurity and brings it back into popular music.

More info on the glass harmonica